The need for a co-operative response to the 2019 election result and the Covid-19 pandemic, community solutions to the housing crisis and reflections on the Peterloo massacre are just a few of the issues covered in the latest edition of The Sheffield Co-operator, published this month. 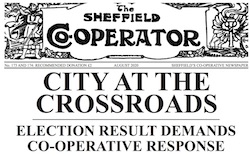 The paper, produced by members of the Sheffield Co-operative Party, dates back to the party’s foundation in 1917 and continues to supply people in Sheffield with news of the city’s co-operative movement.

The latest edition of 24 pages also carries a lengthy history of local and municipal politics in Sheffield, including mention of the early ILP’s role in establishing the Labour and co-operative movements in the city. Sheffield’s first Labour councillor, for example, was ILPer RG Murray in 1905, while four years later Joseph Pointer was elected as the first Labour MP.

Since 2017 Principle 5 have published three editions.
You can also read a pdf of the paper’s centenary edition from 2017 here.
The September 2018 edition is here.