JOY WHITE reports from Newham in east London where a changing community is struggling to recover from Covid-19 after years of austerity, inequality and widening wealth gaps.

It was seeing the bouquets of flowers outside the surgery that stopped me in my tracks. The rising and disproportionate number of deaths due to Covid, particularly among Black and ethnic minority communities, had been a main topic in the news for weeks. Closed shops, empty buses and long queues outside the supermarket let us know that we were in a period of quarantine or lockdown – depending who you spoke to. 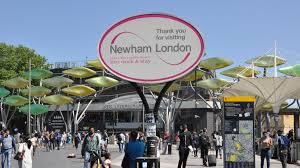 But it was on a walk in an almost deserted high street in May 2020 that the impact of Covid-19 really hit home. The flowers were for one of the GPs, who had died from Covid-19.

On 1 May the Guardian reported that in Newham people had been dying from Covid- 19 at a much higher rate than anywhere else in the UK.

The borough is close to the UK’s major financial districts – the City of London and Canary Wharf. Yet, in contrast to the great wealth of the City, Newham has for a long time been lived in by people on much lower incomes. As in other parts of the country, Covid-19 has revealed these inequalities in new ways.

Situated roughly five miles to the east of the City of London, Newham is a predominantly young borough. With a median age of 31.9, and with 72% of the population claiming a Black or ethnic minority background, it is one of the most culturally diverse areas in the UK. The multicultural nature of the area is in keeping with its history as a location for significant migration from former Commonwealth countries and beyond.

Because of its location, Newham has been undergoing a period of extensive regeneration and redevelopment, particularly in areas near the docks, and around the Olympic Park in Stratford. House prices and rents have risen across the borough, but only a very small percentage of new builds are allocated to social housing. The new Crossrail route has three stations in Newham, making the area even more desirable for those that can afford it.

There are plans to create 35,000 jobs and 4000 new homes in the Royal Docks and 40,000 jobs in Stratford. Currently residents are employed mainly in occupations that are relatively low-paid, including health, care and retail. These patterns are unlikely to change for most residents.

Being a host borough for the London 2012 Olympics was to supposed to bring benefits to the borough in terms of more jobs, better opportunities and affordable housing. Almost 10 years later, promised opportunities have not materialised in any substantial way.

Longstanding Newham residents are still low paid, with a below average median salary of 24,923, but they still live in expensive housing – London rents are some of the highest in the country, no matter which borough you live in. Newham is a place of contrasts, with newly gentrified spaces displaying pockets of wealth while other parts of the borough experience some of the worst overcrowding in the country.

On a national scale the UK government’s shambolic response to the Covid-19 pandemic has revealed the gaping cracks in our systems. Dire conditions in the criminal justice system, the NHS, and in health and social care have been exposed.

We can see with great clarity what it is like to live with very little money, no back up and few resources. We are becoming more and more aware that for some the interactions with state agencies, benefit systems, and the police are fearful and problematic. We cannot help but know that living cheek by jowl in the inner city brings its own pressures.

Like many inner city areas, Newham has been on the receiving end of almost a decade of austerity measures. Unemployment rates remain high, and 52% of children live in poverty. An 81% cut in youth services has left young people with little to do and few places to go. Affordable housing is in short supply; despite regeneration, large numbers of people – 45 per 1000 – are still living in temporary accommodation.

Throughout the lockdown period, young people have watched their parents going to work, or have worked themselves on the front line: in health care, social care, retail and delivery services.

As lockdown is beginning to ease, what do we know about its physical and emotional effects? The repercussions of staying in and having little social contact, and the constant news bulletins about death, are yet to be revealed, but no doubt they will be long lasting. Somehow, we have to come to terms with widespread loss and grief, as well as the recognition that deaths were exacerbated by institutional racism, inequality and poverty.

As the economy goes into freefall, already there are rumblings of further austerity measures, with tax rises and cuts to public spending. A sharp rise in unemployment for young adults is predicted (including graduates).

Young people need hope for the future and hope for a better world, and they are actively resisting the ways in which present social, economic and racial inequality are depicted as the natural order of things. Communities of mutual aid and support are being established and developed.

The government continues to borrow money to prop up the economy. Furlough schemes, payment holidays and ‘bounce back’ loans to keep us going for now. What happens when we return to ‘normal’?

The blooms outside the GP surgery have dried up and been cleared away. Slowly, the shops in the High Street are reopening – although some of the smaller establishments are now up for let. But post-industrial Britain remains committed to a neoliberal agenda, as if there is no other way.

It is almost impossible to create an independent life as a young Black adult in the inner city. Young people who have grown up in the UK over the last 40 years are trying to create a stable foundation out of uncertain conditions – zero-hours and fixed-term contracts, and a gig economy where most tasks have been outsourced.

As one of the world’s richest nations, we need radical reform. We cannot justify going back to how things were. The ‘normal’ that we had of hyper-individual, neoliberal affect presented as common sense has no place in the world that comes after. Public services are not a drain on the economy: they are an investment into a society that needs to strive for fairness and equality.

Joy White is a lecturer in Applied Social Studies at the University of Bedfordshire.

She is author of Urban Music and Entrepreneurship: Beats, Rhymes and Young People’s Enterprise (2016) and Terraformed: Young Black Lives In The Inner City (2020).

This article was originally published on the Soundings blog on 17 July 2020.