MARY HULL draws on her personal and professional experience to explore the contested but increasingly important terrain of transgender rights. The left needs to listen and learn, she says.

In September, Chester-le-Street ILP held an online discussion about the campaign for transgender rights (people whose gender identity is different from that they were assigned at birth) and the Labour Party’s response. It was a warm and friendly discussion; people felt able to ask questions and it was agreed we needed to talk more. Following this, I was asked to write something for this website trying to encapsulate the core of the debate. 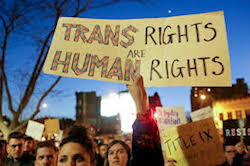 I found myself hesitating, partly because I am not an expert and I do not have lived experience. However, a bit of me was also wary of writing about a subject that has attracted such vitriol, particularly online.

I feel strongly, however, that we cannot duck an issue on this basis – it is just too important – and that, as always in the ILP, we need to conduct ourselves with respectful awareness of a range of opinions while formulating our own.

In 2010 I began a new job as a development worker with Victim Support in the north east tasked with improving access to domestic abuse services for lesbian, gay, bisexual and transgender people. The post was, at the time, unique, quite visionary and took me on a huge learning curve.

At the same time my son was exploring their own non-binary identity (an umbrella term for people whose gender identity does not sit comfortably with being either entirely ‘man’ or ‘woman’). Again, this was a learning process for me.

If I am being honest, I was a bit scared about meeting trans people, saying the wrong thing, being unwittingly offensive, getting the terminology wrong. Unsurprisingly, as soon as I did, all that disappeared – people are just people, after all, and the spectrum of people I met and how they identified and lived their lives was vast.

I think it is important when we frame this discussion to acknowledge such fears, our lack of understanding and uncertainty about what to say and what language to use, and we must try not to let this stifle debate.

My position with Victim Support ended after four years due to lack of funding but it felt positive that we had made progress. Sadly, I am not sure my experience would have been so positive now as the level of anger appears to have mounted between trans people who are vocal about their lack of rights and people questioning the extent of those rights.

In 2004 the Gender Recognition Act came into law. Under this legislation someone who would like their gender legally recognised as different to the sex they were assigned at birth is required to obtain a Gender Recognition Certificate. In many ways this legislation was welcome – at least it recognised trans people and provided a path for legal change. 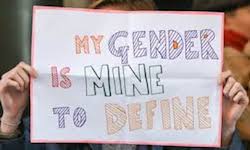 The process, however, is lengthy and medicalised, and there has been a growing movement to amend the law to include self-identification – so that being recognised as trans is not reliant on clinicians, surgery or hormone treatment (which many trans people do not want).

The Tory party has been consulting on such an amendment and were about to introduce it when, two weeks ago, they backtracked and announced only minor changes to the current legislation.

The Labour Party made a commitment in its general election manifesto to reform the Act and introduce self-declaration, but added: “We are not complacent about the culture shift required to make LGBT+ inclusivity a reality.”

One of the biggest concerns expressed by those who are against reform is the potential threat to women-only spaces and services. I find myself at odds with feminist friends on this.

Much of their anger I understand and can see where it comes from, but I do not share it. Women have fought long and hard for women-only spaces and services and, as a trustee for a large women’s refuge, I would be the first to recognise the importance of them.

In a patriarchal world we cannot escape the fact that women all too often are the victims of male violence and control. Yet, in my experience, the reality is that these services have, for a long time, been working with and supporting trans women.

A robust risk and needs assessment should apply to trans women as for every other service user. Anyone who has experienced a women-only space would also question the myth that they are always all inclusive and friendly.

Of course, the issue is not only about women-only spaces. I have friends who feel someone who does not spend their early years labelled as a woman cannot know what it is like to be one, they cannot escape having male privilege. And there are people who feel that a person’s sex (their biological traits) is incredibly important and undeniable.

I do not agree with this and argue against it, but I do see why some people do. Interestingly, trans men are scarcely mentioned in the discussions I have had.

This debate is important on a human rights level but also in terms of potential voters. I know many feminist women who currently would not vote for any politician advocating reform of the GRA. I also know the accusation of being ‘transphobic’ is used quickly, sometimes with devastating impact and can effectively close down debate.

But there is a pathway between these positions. We need to keep talking and most importantly listening. We are not always good at this on the left but listening and learning is vital around trans rights.

A friend of mine wrote in response to the debate: “I believe we should be free to identify however we like. It is not the identity that is important but how we behave. We have to focus on what unites us and not what divides us – which is what the Right want us to do. Let us look not at our differences in gender identity but what we have in common.”

I am aware this article is but a small snapshot of current debates and does not do justice to the complexity of the issues. But perhaps it is a starting point.

Above all, we need to celebrate the huge variety of all people and how we identify – a genuine richness.

Gendered Intelligence is a trans-led charity working to increase understanding of gender diversity.