HARRY BARNES picks out a few problems and positives from the Labour leader’s recent Fabian pamphlet.

The best indication of Labour leader Keir Starmer’s political stance does not come from his recent speech at the party conference, but from his Fabian pamphlet published on 23 September. 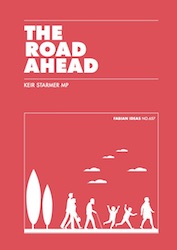 Entitled The Road Ahead, it raises two questions: Is this election winning material? And does it have support among the declining membership of the Labour Party and the general public?

There are two problematic elements in his analysis:

1. While he makes a commitment to updating our existing public services, especially education and health, he is not in favour of further expanding the public sector. This would be understandable if he felt tackling other key problems, such as climate change and Covid-19, had to take priority. But he seems to be committed, even in the long term, to linking the public sector with existing private enterprise.

For example, he writes in his introduction about a future Labour government working “in partnership with a brilliant and innovative private sector to create good jobs and harness the potential of technology”, adding that it “will be focused on creating jobs people are proud of, reimagining our public services for those who use them, creating a new and better relationship with business and delivering world-class health and education”.

The aim, he says, is to “build an effective partnership of state and private sector to prioritise the things we have seen really matter”. This approach, he says later, is opposed to “the planned economies of the 20th century”, which he describes as “a throwback”. Nowhere does he suggest it might be possible for us to overcome the shortcomings of those systems.

2. The second problem, I think, arises from his heavy criticism of nationalism. He writes that “forces pushing apart our country and tearing at the social fabric – nationalism, extremism and misinformation – need to be tackled, but have been embraced or ignored by Conservative and Scottish Nationalist governments”.

“Most immediately damaging to our country has been the rise of the multi-headed hydra of nationalism,” he adds, concluding that: “We are proudly patriotic but we reject the divisiveness of nationalism.”

I may wish Scottish and Welsh nationalism had not gained support in the way they have recently, but I would look for compromise and improvement, some form of federalism, in fact, that would meet the needs of people to have a greater say over political operations within their homelands.

It is also notable that Starmer makes no reference to Northern Ireland, despite his past links with the area.

On the more positive side, he states that: “In the first 100 days of the next Labour government, it will sign into law a New Deal for Working People … across the country, with improved conditions, quality jobs, training and better pay”.

That deal will include an increased minimum wage and increases in workers’ rights from day one, while he is also committed to replacing universal credit and changing our social security system to ensure that work pays and the low-paid keep more of the money they earn.

For me, there are three massive and immediate political issues facing us – climate change, the impact of the Covid-19 pandemic, and social justice. Yet Starmer only touches on these vital issues now and then.

This pamphlet may be called The Road Ahead but it raises more questions than it answers.

He blogs at ‘Three Score Years and Ten’ and is an active member of the Dronfield Labour Party discussion forum, ‘Dronfield Blather’.