MARY STRATFORD reviews a joint memoir from two remarkable women who were thrust into the spotlight by the 1984 miners’ strike and found a shared sense of values, commitment and joy. 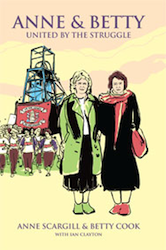 I agreed to review this book with some trepidation as I have met and admired both women whose stories it tells. But I write this largely because it is so rare to see a book in which defiant working-class women are able to recount their own tales and define their own political activism. So much of what they have written resonated with me and brought to the fore many conflicting emotions I had not anticipated.

Betty Cook and Anne Scargill were born a generation before me but I was flooded with memories of the lives of many women brought up in similar mining communities. As a woman, there are real contradictions: it is possible both to love the heritage and closeness of your community but struggle with the constraints imposed by it. During and after the 1984 miners’ strike these contradictions were very evident in Betty’s and Anne’s lives.

Although they share a mining background and both had troubled relationship with their mothers – and partners – their lives differ radically. The book provides a rich social history of a time before contraception and the social changes that brought about greater freedoms for many women, freedoms denied to Betty and Anne.

Interestingly, both women worked while their children were young, which was unusual in mining communities at that time. And it was in the workplace that Betty first began her trade union and community activism.

Both are frank and open in outlining their lives – not any easy task when you still live in a closely knit former mining community. Betty, in particular, holds nothing back, which in part is linked to her abusive marriage and subsequent divorce (at which point I cheered her to the rafters), but also to the tragic and devastating loss of two sons, one to ill health, another to a mining accident.

It is impossible not to be moved by her inner strength and endurance. Yet, she is also able to share the joy and satisfaction of forging a new life, freed from past constraints.

Anne’s account is more circumspect, particularly around her married life. This is hardly surprising given she was married to Arthur Scargill. Her ongoing sense of loyalty to her ex-husband and his legacy is evident. However, at times the sparseness of her language tells the bigger story – for example, when describing the wedding of their only child to which “Arthur was invited but chose not to attend”. 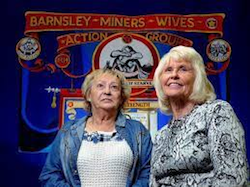 Anne certainly did not have an easy time being married to the man who rose to be the most high-profile union leader in the country. It is clear she was uncomfortable with many aspects of this role. But there was obvious delight at some of the experiences that followed, such as foreign travel and friendships with the most unlikely of people (Harry Belafonte, for example), and genuine hurt when the marriage ends.

It was the strike which brought Anne and Betty together. Their sense of values and commitment, alongside a shared sense of humour, helped forge a friendship that lasted decades.

Neither holds anything back when describing the tensions within the emerging support groups, not least with union men. And Betty provides a vivid description of the cultural clashes that often took place when working with younger women, who often had a radically differing outlook.

Neither were political novices, however, and it was inevitable they would play a leading role locally and, ultimately, nationally. Anne was the more maverick of the two. Her commitment to direct action during and after the miners’ strike sometimes upset others. For example, during the vigil at Parkside colliery Anne, without consultation, separately organised a sit-in protest below ground. She thought actions spoke louder than words.

Both women continue to support the Orgreave truth and justice campaign, and travel around the county actively engaged in causes close to their hearts. Like many other strong mining women, they remain the beating heart of their families and communities. For them, caring for others is as natural as breathing. It is clear from this book that their activism, sense of humour and joy has not dimmed with the passing years.

Anne & Betty: United by the Struggle, by Anne Scargill and Betty Cook, with Ian Clayton, is published by Route Publishing (2020) and available here for £20.

This article was originally published in the journal of the North East Labour History Society. Reproduced with thanks.

Mary Stratford’s obituary of Anne Suddick, another stalwart of the 1984 miners’ strike, is here.