The importance of religious beliefs to Keir Hardie’s political convictions is well known. But most Labour historians have underplayed the influence of radical Christianity on his world view, says NEIL JOHNSON.

“The work of the Labour movement today is to apply those principles of Christ’s teaching to modern industrial and economic problems so as to bring about the time when there shall be no poverty, either of body, mind, or spirit, but in a land, in a world so beautiful, so richly endowed, that there shall be abundance for all.”[1]
Keir Hardie (1910)

For Keir Hardie, socialism was the Christianity of his day. When he realised that the abject poverty of his early years was caused by economic, social and political oppression, Hardie dedicated his life to the fight for justice, finding inspiration in the visions, insights and concepts of many figures, from Jesus to Robert Burns and Karl Marx. 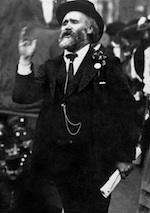 At the heart of his creed was a belief that human solidarity is sacred. Pivotal to this view was the figure of Jesus, the working man from Nazareth and political agitator who championed the cause of the poor and marginalised. Time and again throughout his public life, Hardie spoke of the importance of Jesus to his political faith, constantly proclaiming the self-giving service of the carpenter from Galilee.

Hardie’s view of Jesus was shaped by the early influence of the Evangelical Union’s Christology, Ernest Renan’s Life of Jesus,[2] and the ‘new theology’ of RJ Campbell’s sermons[3], as well his own reflections on the parallels between the sufferings of the Nazarene agitator and the plight of workers in his time, including his personal battles. Ultimately, Hardie saw in Jesus a symbol of working-class struggle and regarded the incarnation as an event of sacred solidarity.

For him, the message or gospel of Jesus was that an alternative, ‘New World’, the ‘Kingdom of God’, could be manifest on Earth where there would be a total reordering of human relationships. Hardie regarded socialism as the political manifesto for that kingdom. He interpreted the New World order as one of sacred egalitarianism, a universal comradeship or kinship that was, to him, the will of the divine for the whole of creation, including humankind. This was the ultimate goal of Hardie’s socialism.

He often used the language of Christianity unashamedly to describe his vision for British society and the wider world because for him the teachings of Jesus should appeal equally to socialists, Labour activists and anyone who was committed to the cause of human solidarity.

Hardie thought Christianity had become corrupted after it was adopted by the powers of the Roman Empire and its successors, but he traced a radical movement that remained faithful, either in name or spirit, to the gospel revealed by Jesus. And by seeking a religion of humanity, Hardie found a common thread from Burns to contemporary social commentators – such as Thomas Carlyle, John Ruskin, John Stuart Mill, Ralph Waldo Emerson and Walt Whitman – through the radical Christian history of Britain and Europe, including the Weaving Friars, John Ball and the Diggers. 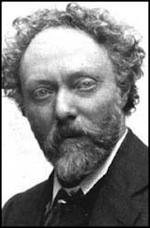 In this sense, Hardie’s socialism was neither scientific nor utopian. In a memorial booklet written shortly after Hardie’s death, John Bruce Glasier (left), who followed Hardie as editor of Labour Leader, wrote: “So far as he was influenced by the ideas of others, it was, as he himself stated, by the Bible, the songs of Burns, the writings of Carlyle, Ruskin and Mill, and the democratic tradition in the working-class homes in Scotland in his early days. In the main, however, as with many of us, he derived his socialism from his own thought and feeling, the plight of the workers, and the state of the world.”[4]

His family upbringing meant that when Hardie began to engage with the dissenting Christian culture of chapel life and faith, it was done so with a grounding in other sources, including the radical Romanticism of Burns, and an openness to those regarded as freethinkers of the 18th and 19th centuries, mainly from Britain, but increasingly European and beyond.

Indeed, Hardie wove together many ideologies that were not natural allies, bringing texture and heft to his creed. For him, true faith in the cause for the liberation and solidarity of all humanity was non-dogmatic and totally inclusive. Consequently, he remained fundamentally nonconformist in the fullest sense of the word.

His socialism was an inclusive, ‘big tent’ system that embraced the whole Labour movement, both national and international. This is reflected in his affinity with Marx, who he considered to be a prophet of the future, and with William Morris, a prophet who reminded the movement of its rich heritage. Although he was open to broad and diverse insights from his comrades across the international Labour movement, Hardie was committed to parliamentary democracy and his struggle was always to win an electoral mandate for the socialist cause. 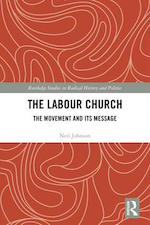 The clearest distinction was their relationship to the traditional Christian denominations. Christian Socialists remained within the membership of the Christian church and proclaimed their politics from that position, whereas Socialist Christians spoke from outside institutional Christianity.

During my research into the Labour Church and its political and theological context, I came across many late-Victorian British socialists who claimed Jesus as a prophet of their cause, even though they had rejected certain creedal aspects of Christianity. Some talked about the ‘religion of socialism’ as a means of explaining their conviction to a political cause which offered a vision to them of heaven on earth.

I agree with WW Knox, that “Socialist Christianity was encapsulated in the figure of Keir Hardie”[5] because his theology was Christo-centric, emphasising that the nature, will and ways of the divine were revealed and realised in the figure of Jesus. From his early days in the Evangelical Union and throughout his life in the Labour movement, when Hardie spoke about God he did so by referring to positive, affirming, and creative relationships. This relational concept of divinity led to his creed of sacred kinship promoted through socialism.

Hardie’s life ended in tragedy when he died aged 59 at the end of September 1915 during international conflict. The First World War represented the evil of human division, the antithesis of Hardie’s deepest beliefs and hopes. The sacred cause to which he had dedicated his life seemed to be facing absolute defeat, and Hardie spent the final year of his life totally disillusioned as his vision and values were discredited by the words and actions of politicians and their military commanders in Britain, Europe and across the world.

Although tributes were paid after Hardie’s death to his faithful compassion and dedication to campaigns to alleviate poverty and injustice, many of these homages were somewhat muted due to the jingoistic atmosphere of the time. Only when the deadly cost of war was realised was there an appreciation of what Hardie stood for. By the end of the decade, he was being reassessed and began to be regarded as a prophet of peace, justice and universal kinship.

As he had written in From Serfdom to Socialism in 1907:
“Socialism, with its promise of freedom, its larger hope for humanity, its triumph of peace over war, its binding of the races of the earth into one all-embracing brotherhood, must prevail. Capitalism is the creed of the dying present; Socialism throbs with the life of the days that are to be.”

Neil Johnson is the author of The Labour Church: The movement and its message (Routledge, 2017).
His new work, Hardie’s Creed, is a comprehensive study of the significance of Hardie’s religious faith to his life and politics, underpinned by “the understanding that labour history is religious history, that faith has driven working people to seek freedom, justice, and peace across the centuries”.
He is currently seeking a publisher for the book and can be contacted on neilwj67@gmail.com.