BEN SALTONSTALL reviews a new book on the failings of the left that asks the right questions but falls for the all-too-easy answers of right-wing populism.

The view that the modern left is made up of university educated ‘liberal elites’ who are uncomfortable with working class people is widely shared. Without a hint of irony, even the Archbishop of York has expressed concern about this, saying:

“Many English people feel left behind by metropolitan elites in London and the South East, and by devolved governments and strengthened regional identities in Scotland and Wales.

“Their heartfelt cry to be heard is often disregarded. It is wilfully misunderstood or patronised as being backwardly xenophobic.” 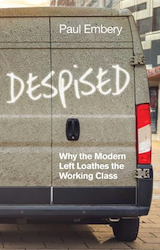 Last year, the polarising Blue Labour ‘Lexiteer’, Paul Embery, published a book with a similar message, entitled: Despised: Why the modern left loathes the working class. The book has the potential to tell the left things it needs to hear and understand. Unfortunately, it fails to do so.

It begins promisingly. He rightly asks the question: why should a concern about levels of immigration be considered automatically racist? What is wrong with feeling uncomfortable when your community and networks change radically in a very short space of time? Acknowledging and engaging with these legitimate concerns is really important. To dismiss them, as Embery underlines, is patronising.

He particularly blames Tony Blair for promoting the metropolitan politics he despises, quoting his 2005 conference speech: “I hear people say that we have to stop and debate globalisation. You might as well debate whether autumn should follow summer… The character of this changing world … has no custom and practice.”

Embery is right to characterise the message of the speech as, “there is no such thing as society, only money and trade”.

But he goes on to defend the forces of conservatism that Blair was attacking, ignoring how in practice Blair’s government often embraced them in the most egregious ways. Just consider New Labour Home Secretary David Blunkett’s comments on asylum seekers, for example. He told refugees from Afghanistan in 2004 to “get back home and rebuild their countries”.

Embery fails provide a helpful critique because he loses sight of globalisation. Instead, he is drawn down a variety of rabbit holes, attacking terms such as ‘white privilege’ and the call for an easier legal route to trans self-identification.

He attacks the notion of white privilege because “it ignores the crucial issue of class, which, for the Left, ought to be the primary consideration”. This sounds quite reasonable at first until you consider the actual experiences of Black people of all classes. For example, if you are Black and detained, you are more likely to be killed by the police.

The story of Olusheni Lewis grimly illustrates this point. An MA student from an evangelical Christian family, he was unlawfully killed by the police in a mental health unit while his doctors and nurses passively looked on.

This alienating experience of difference works at every level. For example, a white person can go to a classical music concert without being stared at but that is not, I regret to say, what’s it’s like if you’re Black. When I went to the Bridgewater Hall with a Black friend literally half the audience stared at us with more intensity, at times, than they did at the ensemble playing Haydn. My friend – apart from liking classical music – is also a proud working class Mancunian, but that’s not why the crowd were looking.

Furthermore, the people who use the term white privilege also acknowledge class and other forms of privilege. One US writer made the point that male privilege is the privilege of being able to walk out of a car park without worrying about being raped.

Perhaps the term ‘privilege’ is unhelpful and misleading, but the understanding that lies behind it is valid or, as even Embery acknowledges when he says, “there is, of course, merit in the argument”. Which is more than you can say for his argument. Having firmly made the point that in matters of race and class, the left should focus primarily on class, he later goes on to attack them for doing precisely this:

“Some on today’s left … see workers … principally through the prism of their place in the economic structure … as though solidarity on the basis of class were the only thing that mattered.”

He then claims that working class people may feel more affinity with an owner of capital who has the same accent as them or is from the same town than with working class people from elsewhere. That is undoubtedly true these days and arguably why class is increasingly less potent as a political concept.

This contradiction highlights Embery’s lack of credibility. He will use any argument to justify his nationalism, even if that means contradicting himself.

Worse, he goes on to say that such an affinity may arise because people “believe in the same God”. This statement has the potential to legitimise Islamophobia and antisemitism but thankfully it is largely delusional. The English are not usually dogmatic about religion at all.

In reality, evidence shows that we English are more likely to feel at ease with someone who is sceptical though not dismissive of the existence of God. Agnosticism or a vague belief in God is the preferred religious stance of a majority of people in England and, I’m glad to say, a significant number of Church of England’s clergy too. It would be interesting to hear the Archbishop of York’s views on this.

On trans self-identification, Embery trots out the usual arguments. Apparently, making it easier to legally transition would “effectively eradicate the concept of womanhood altogether”. This ignores the fact that self-identification is easier in Denmark, Portugal, Norway, Ireland, Greece and most of South America, and women still seem to exist in those countries.

He also manages to ignore the fact that many trans people are trans men not women. In fact, according to JK Rowling, whom I’m sure he would accept as an authority, there is a “huge explosion in young women wishing to transition”.

If I follow Embery’s logic, allowing easier identification for them may actually eradicate my manhood (although at my age that would not be much of a loss).

It is easy to mock such arguments. However, the unrelenting negative portrayal of trans women is transphobic. He points to the case of Stephen Wood – a trans woman under our current legal framework – who assaulted two women while on remand in a women’s jail. Of course, any reasonable prison system would exclude prisoners like Wood from criminal justice settings where they may commit more sexual offences.

No one disagrees with that. It is the fact that Embery chooses to focus on Wood – the exception who should be dealt with – and not on most trans men and women who endure daily bullying, discrimination and, all too often, violence. He is not providing a balanced discussion of a complex issue. He is having a go at a group he finds so threatening it could even “eradicate … womanhood altogether”. His discussion of trans rights bears striking resemblance to the homophobia of the 1980s and ’90s. 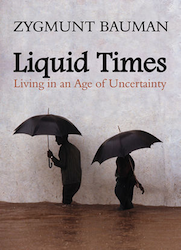 To understand what is happening to our politics, and avoid going on the same journey as Embery, it is illuminating to go back to globalisation. Zygmunt Bauman provides a better understanding of the processes at play than Embery does (although his political remedies are broad and unspecific).

In 2007, Bauman argued in Liquid Times that the processes of globalisation have created the paradoxical task of finding “local solutions to globally conceived troubles and quandaries”.

As our social experience becomes ever more “liquid” – ever changing, uncertain, threatening – we demand that the state protects us, which it can no longer do effectively, he says.

And so fences are built “to cover up by a public display of muscle flexing and rhetorical bravado that tends to be more vigorous and vociferous the more hapless and short-handed the politicians themselves are… [that] the latent functions of the barriers at the border, ostensibly erected against ‘false asylum seekers’ and ‘merely economic’ migrants, is to fortify the shaky, erratic and unpredictable existence of the insiders.

“But liquid modern life is bound to stay erratic and capricious whatever the treatment given and whatever plight is visited on ‘undesirable aliens’ – and so the results tend to be short-lived and the hopes attached to ‘tough and decisive’ measures are dashed as soon as they are raised.”

By failing to grasp this self-consuming process, Embery is pulled down the political drain of right-wing populism. He has no solutions, he just offers the obsessions and delusions of a degenerating political and social situation.

Despised: Why the modern left loathes the working class, by Paul Embery, is published by Polity Press and available for £15.99.