It’s no secret that support for proportional representation has been growing within the Labour Party, not least on the Labour left. JACQUELINE TAYLOR puts the socialist case for a proportional voting system for UK general elections and addresses some of the common arguments against it.

Proportional representation (PR) is an electoral system in which the distribution of seats corresponds closely with the proportion of the total votes cast for each party.
UK Parliament

First Past the Post (FPTP) is a voting system in which a candidate may be elected by a simple majority rather than an absolute majority.
Collins English Dictionary

PR is an important demand that all socialists should support. As democratic socialists, we do not want to abolish the gains of the current ‘bourgeois’ democracy – free elections, rights to assembly, free speech, and so on – but to build and expand them under a socialist democracy. Under First Past the Post this is not possible.

If you live in a constituency that has always had a large majority for one of the big parties, unless you support that party, your vote is effectively wasted. The system is designed to persuade you either not to participate in the democratic process, or to vote tactically for a party you consider the ‘lesser evil’.

As a result, abstention rates in Britain have generally been higher than in countries with PR systems. Our democratic deficit is greater.

What’s more, election campaigns under FPTP are totally distorted since parties concentrate all their resources and activists in so-called ‘marginal seats’ that change hands more regularly from election to election. Political discussion and activity are much reduced in ‘safe seats’, those that are always either Tory or Labour.

Complacency and even corruption flourish much more easily in situations where you have one-party fiefdoms. We have seen this in local government and the same can be true at the national level.

Under Margaret Thatcher and now Boris Johnson, the Tories have used crushing parliamentary majorities to make vicious and sustained attacks on public services without ever winning the support of a majority of voters. Yes, we have a right-wing media and a self-serving establishment to reckon with, but it is the FPTP voting system that turns this kind of minority support into long-term dominance in parliament. It is a rigged system.

Will Labour ever win a majority?

Some people on the left argue that under PR Labour could never win a majority in parliament because it would need more than 50% of the vote to govern. This, they say, will push it into alliances with parties to its right.

However, this is a contradictory argument for democratic socialists to make. We argue for a fundamental change in society, for a real break in the system, and yet, by this account, we do not think it is possible to win support from an overall majority of the electorate for such a project.

That said, we need to be aware of the political realities on the ground, of how difficult it is for the left to win any election. Under FPTP it is even more difficult. In 19 of the last 20 general elections, parties to the left of the Conservatives have won the popular vote, yet the Tories have governed for two thirds of that time.

Margaret Thatcher won four times, but her highest vote was only 43.9%. Tony Blair peaked at about the same level but in his last election formed a government with only 35.4%. Boris Johnson rules, or rather misrules, after winning 43.6% of the vote. The last time a British government won more than 50% of the vote was in 1931.

With FPTP, there is a real risk we could end up with successive Tory governments, with Labour never again actually winning an overall majority. The loss of ‘red wall’ seats and erosion of Labour’s base, plus the possibility of Scottish independence, only increase that risk.

With PR, however, the landscape could look very different. A radical left current representing between 5% and 10% of the vote could provide an active constraint on a social democratic government, pushing it, at least partially, to defend the interests of working people. This pressure could be applied without left MPs needing to take ministerial positions – by providing external support to a Labour government and by supporting certain measures in parliament.

This sort of approach has been taken by the Left Bloc and the Communist Party in Portugal, for example. In the UK, under FPTP, Labour left forces have usually ended up in far worse ‘alliances’ under Labour governments, with little leverage to impose more progressive policies.

Building a socialist alternative capable of breaking with capitalism will involve mass struggles, revolutionary crises and interventions (perhaps for prolonged periods) in parliamentary institutions. Given the current political landscape, it’s unlikely such an outcome will be realised in the immediate future. Meanwhile, an increasing number of people will suffer under the unequal policies of a Tory government, where public services will repeatedly be cut to the bone.

The left argument for PR is not that it will moderate politics, drowning out the extremes and helping to develop consensus politics for the common good. We are not in favour of PR because we want to push for a strategic electoral alliance with the Liberal Democrats. Instead, we should argue for PR because our constitutional arrangements are in crisis and the political system is blocked.

What’s more, hung parliaments and coalitions are entirely possible under FPTP too, as we saw with the Cameron/Clegg government after 2010 and the Lib/Lab pact under Jim Callaghan in the 1970s. Under PR, a coalition government will more accurately represent the voting population, not a temporary alliance based merely on pacts between parties.

Will PR lead to a Labour split?

The Labour Party’s much cited ‘broad church’ is an uneasy coalition between left social democratic currents and social liberal centrists. In countries with PR often the left social democratic and far left ‘class struggle’ movements are found in separate parties and this can allow different voices to be heard. 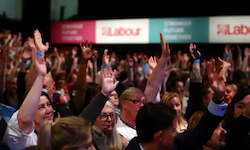 So if PR led to a split in the Labour Party, would it matter? After all, it may prevent the constant internal party conflict between different factions who currently do not want to separate because they know how difficult it is for any new party to establish itself and get elected under FPTP. This constant conflict prevents Labour from providing one strong and unified voice, which may have a negative impact on the public’s perception and voter intentions.

Under PR, multiple strong left parties would need to negotiate to form coalitions to beat the Tories, which may also help to prevent factional wars. Radical left groups such as Left Bloc in Portugal and Podemos in Spain have been able to build support effectively and gain power in coalition governments.

In fact, PR may lead to the different factions actually treating each other more inclusively and kindly, with greater membership engagement, as they know the other faction can choose to split if they do not listen to each other, their members and wider communities. PR may therefore ensure every part of the left movement truly matters and different views can thrive within the party itself. Only when Labour champions internal membership democracy can we truly champion the same values in the electorate.

We must therefore embrace the member-led values held by Open Labour, and those which underpinned Momentum’s recent policy primary where every member had the chance to vote on the motions Momentum will campaign for at the 2022 Labour conference.

Will PR give the far right a voice?

Some argue that PR could allow the hard right or fascists to win representation. Britain is practically the only European country that persists with the FPTP system. Nobody on the left in countries such as France, Italy or Spain argues for abandoning PR and returning to FPTP to keep out hard-right parties, nor for them to be banned from parliament.

Of course, the left supports the full force of the law being used against hate speech or incitement to violence, and mobilises in defence of communities that are physically intimidated or attacked by reactionary forces. But legal calls to ban far right parties would be regarded as an attack on free speech by most people. They could easily backfire on the left, too, opening the door for calls for all ‘extremes’ to be banned.

More importantly, if hard right or fascist MPs are elected that will be a reflection of political reality, of their relative support in the country, and their defeat will depend on a mass campaign against their ideas and actions. You cannot wish their support away by legal bans.

Indeed, it is not PR that has provided the political opening for their ideas. Often it is the failure of left of centre parties to defend the interests of working people and make strong arguments in support of transformational policies. What’s more, open participation in political institutions can expose their racist ideas and make it easier for them to be examined and challenged.

The campaign for PR

There are many socialist policies the Labour Party needs to campaign for, including green jobs, defending migrant communities from racist immigration policies, and a £15 minimum wage to bring dignity to working lives. But none of these is more strategically important for securing electoral power than a campaign for PR, for Labour will never be able to implement its socialist policies until it gets into power. 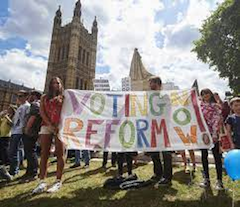 Contrary to popular opinion, evidence suggests the left achieves more when it fights for socialism under a PR system. It’s sometimes claimed that PR leads to centrism, but around the world it has again and again led to policies more left wing than any British government has implemented since at least the 1970s. If we want properly funded public services, or a democratised economy, or fair trade union laws – and if we want to keep these things once they have been won – we need PR.

What’s more, PR is not an alien system to Labour. From Labour leadership elections to votes for the party’s National Executive Committee, many internal Labour ballots use a PR system, and some trade unions do as well. The devolved parliaments and assemblies set up by Labour also use PR. In this context, it is a contradiction for Labour to continue to support FPTP for parliamentary elections.

More than 200 Constituency Labour Parties – more than 30% – have now called for PR and some three-quarters of Labour members believe we should commit to PR in our next manifesto. This support must result in a change in party policy and for that we need to build momentum ahead of the 2022 Labour conference.

At the 2021 conference, a motion calling for the party to back PR in parliamentary elections was defeated. Despite support from an overwhelming number of CLP delegates, it fell due to lack of support from trade unions that had not been persuaded by the party leadership to abandon FPTP.

There is a lot of hope to draw from last year’s conference but much more needs to be done to ensure Labour commits to PR in the next manifesto. Campaigns run by the Labour Campaign for a New Democracy and Get PR Done need the left’s support. Motions need to be passed by CLPs and we should push for PR to be introduced for all union elections.

PR is the only way forwards for the left. Its moment has come. And if the opportunity is not seized now it may not come again for many years. This transformation of British democracy cannot be imposed from the top down. It must come as a loud and clear demand from across the Labour membership, an expression of shared commitment to democratic principles, fairness and the implementation of our socialist values.

Jacqueline Taylor is a member of Open Labour.

An earlier version of this article first appeared on the Open Labour website.