PAUL SALVESON hails the work of a north-west ILPer and intrepid co-operator whose life and achievements are finally due to be commemorated nearly a century after her death.

Sarah Reddish was one of the north’s most outstanding campaigners for women’s rights. She was a co-operator, socialist and so much more. Plans are afoot to celebrate her memory. 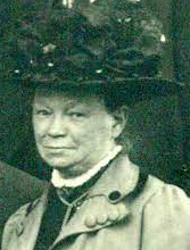 She was born in Leigh in 1849 and left school at the age of 11 to work at home with her mother, a silk weaver. Her father was active in the co-operative movement and the family moved to Bolton where he became librarian and secretary to the Bolton Co-operative Education Committee. His co-operative principles rubbed off on his daughter.

Sarah went on to work as a winder and reeler in the local mills and eventually became a forewoman in a hosiery mill. Most of her busy life was devoted to the co-operative movement, but she was also prominent in the women’s suffrage campaign and the Independent Labour Party (ILP).

She was a popular public speaker and travelled the country with the first women’s Clarion van tour of 1896, inspired by Robert Blatchford’s popular Clarion newspaper. From the back of the horse-drawn van, Sarah and her sisters propounded the new gospel of socialism to audiences that varied from bemused and hostile to enthusiastic.

In 1899 she was appointed part-time organiser of the Women’s Trade Union League. She founded the Bolton branch of the Co-operative Women’s Guild (see pic below) and was the national president for many years. She organised a demonstration on the steps of Bolton Town Hall to protest against the money being spent on the coronation of Edward VII, suggesting the money would have been better spent on feeding the poor.

In 1899, she became the first woman on the Bolton education board and was later  elected to the Poor Law Guardians. She was also the first woman to stand for Bolton council, in 1907, representing women’s organisations in the town. She polled 737 votes but was not elected.

One of her most outstanding contributions to Bolton was her work for better childcare facilities. In 1906 she travelled to Ghent and Brussels to study childcare initiatives being launched by co-operative societies. 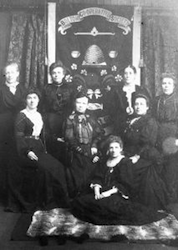 On her return she established a school for mothers in Bolton to provide support for working class mothers, naming it ‘Babies Welcome’ to avoid appearing condescending to the women who used it. It proved to be very successful and eventually eight centres were opened, leading to a dramatic reduction in child mortality in the town.

She was an active member of Bolton Socialist Club, which survives to this day. Its members are keen to do more to celebrate her contribution.

Chris Chilton, chair of the club, said: “Sarah Reddish is Bolton’s unsung hero. Her work in the Women’s Co-operative Guild, the trade union movement, the women’s suffrage movement and especially in public health has had as significant an impact on the lives of the working people of Bolton as any of those, predominantly male, figures honoured in statues, portraits and history books. Yet her only memorial is her gravestone in Heaton cemetery. It’s time she was given the recognition she truly deserves.”

Moves are afoot to establish a permanent memorial to Sarah.

“We’re still in discussion about the exact form of the memorial,” said Chilton, “A plaque is most likely. Another possibility is an annual Sarah Reddish lecture. A further possibility, subject to funding, is getting a researcher to collate all the different sources of information about her into a single publication.”

Anyone interested in contributing to a memorial for Sarah Reddish, or helping in the campaign, should contact Chris Chilton at: chris_chilton@hotmail.com

Paul Salveson’s book Moorlands, Memories and Reflections features Sarah Reddish’s work for the Women’s Co-operative Guild. You can order a copy of this and some of Paul’s other books here.

This article was originally published in the June 2022 edition of Paul’s newsletter, Lancashire Loominary.