“Fellowship was the foundation of their politics,” said Barry Winter, recalling the culture of the early ILP at the organisation’s 120th anniversary Weekend School in Scarborough on 4/5 May. And fellowship was much in evidence among modern ILPers and friends too as they gathered to consider lessons of the ILP’s past for prospects of progressive change in the future.

Winter’s remarks came during the opening session of a two-day programme, called ‘Ethical Socialism, Capitalism and the State’, in which he surveyed the ILP’s 12 decades of political activity in and out of the Labour Party, asking what can be learned by a left struggling to make headway in our current disconnected and politically disenchanted society. 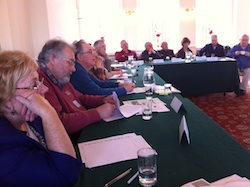 He began by sketching the lives of some of the remarkable people whose own personal stories make up the ILP’s history, from the well-known, such as Keir Hardie and Jennie Lee, to the less familiar though no less important, such as Walter and Annie Mallorie, Emrys Thomas and Stafford Cottman.

He considered the ILP’s beginnings and its role in founding the Labour Party, the disappointments which led to its disaffiliation in 1932, and the political perspective it brought to the left on returning to Labour in the 1970s.

“Put simply, the early ILP, with its strong ethical concerns, wanted to ‘make socialists’,” said Winter. “It was about creating an alternative political culture as the foundation for building a new, socially-just society.”

This, he pointed out, was always “an arduous, uphill struggle”, one that is no less difficult today.

“Never before have people been quite so disillusioned with politics at a time when only politics can resolve the serious economic problems faced by much of the western world,” he commented.

“Considering the ravages capitalism is continuing to wreak, today’s challenge is as big as anything the ILP has faced in its history. The question is whether the left, of which we are a tiny fragment, can make itself fit for purpose.

“The ILP’s history does not offer us the answers but I think it can afford us some helpful insights about the direction of travel. And perhaps that’s all we could ever expect.”

One potential ‘direction of travel’ for the left was the focus of discussion in the following session, led by Anna Turley, a Labour prospective parliamentary candidate for Redcar and senior researcher at IPPR North.

Turley described what she called a “co-operative rennaissance” in the public sector, centred on the growth of co-operative councils and schools as alternatives to the private sector. 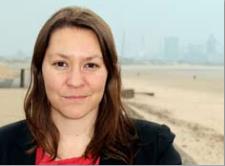 A former coordinator of the Co-operative Councils Network, Turley argued that Labour local authorities have been rediscovering some of the early movement’s values of self-help to resist the coalition government’s austerity-led cut-backs and privatisation agenda.

More than 100 Labour councils originally signed up to a set of principles based on co-op values, and 21 are now formally linked as part of the Network. It was established in 2011, not only as a defence against the coalition’s attempt to co-opt the language and purpose of mutuals, but also “in recognition that public services need to change”, she said.

Turley outlined examples of current co-operative council-led initiatives in areas such as housing, regeneration, education, finance, energy and youth crime. “The Network believes a co-operative approach can be applied to any area of local government,” she said. “But councils have an important role to play in shaping localities as a whole, not just as service deliverers.”

While the speech was warmly received, a number of respondents warned that implementing co-operative initiatives in a period of public sector cuts was fraught with danger, that the difficulties of maintaining co-operative alternatives in an increasingly open market should not be underestimated.

Robust discussion continued on day two with consideration of Ed Miliband’s ‘one nation’ Labour Party and its policy review process led by MP Jon Cruddas, whose speech to the IPPR in February was shown on screen to kick off the debate.

Views of Cruddas’s talk ranged from the highly critical (it was “patronising nonsense” and “fashionable froth”, with “too much emphasis on nation and family”, according to some), to the more accepting – “humanitarian”, “sensitive”, and “a genuine attempt to think through some difficult problems”, according to others.

Some argued that ‘one nation Labour’ appeared to be no different to ‘new Labour’, that it was still undemocratic and over-centralised; while others suggested it was open to ideas which previous Labour leaderships had never considered, and that its more thoughtful and historical approach “provides an opening to talk about our politics”.

ILP chair David Connolly eventually captured the mood, emphasising the dangers of a knee-jerk hostility, which merely offers “a road to nowhere”.

“The situation we face in this country is drastic,” he said. “The last veneer of social democracy is being ripped away to reveal a very selfish society. The right-wing drift we always talked about is becoming a sprint.

“The question is, is this leadership one that can halt that? We don’t know if it is, but we have to engage with them and what they’re trying to do.”

Many agreed that engagement was key, and that the ILP has much to do itself via day schools, public meetings and more round table discussions. One hundred and twenty years on, the ethic of fellowship remains; the task still to create an alternative political culture for a new society.

Click here to read more on the ILP’s history.

Click here to read our series of ILP anniversary profiles.

Click here to find out more about Anna Turley, and here to read about her work with IPPR.

Click here for more on the Co-operative Councils Network.

See also: ‘Handle with Care’ and ‘Are Co-operative Schools the Answer?’

Click here for Jon Cruddas’s speech on ‘The Condition of Britain’.