GERRY LAVERY, JOE ROLLIN and CALLUM STANLAND report from ‘Unions at the Heart of the Welfare State’, a national conference called by the TUC National Consultative Committee for Unemployed Workers’ Centres.

The conference, held on Friday 27 February at the TUC headquarters in London, was attended by about 100 people, including Unite Community delegates from various regions across the country, with eight representatives from the North East, Yorkshire & Humberside.

The background to the day was a recognition that unemployed and disabled people have suffered particularly from the government’s austerity measures and social security reforms. The reforms have brought increased poverty, depression, and even suicide for some, while there is also evidence of an increase in disability hate crime. Claimants are forced into low paid, insecure and exploitative work, and state payments are used to subsidise low pay.

Through formal presentations and workshops, the conference aimed to produce a charter for welfare and explore ways in which collective action could be mobilised in communities and workplaces.

The day started with two presentations, the first by Helen Flanagan from the Public and Commercial Services Union (PCS) and the second by Eleanor Firman from Disabled People Against Cuts (DPAC).

Flanagan acknowledged the cuts in social security and the way claimants have been demonised. She also noted how sanctions have increased and that sanctions penalties are, proportionately, more severe than those applied to law breakers who appear in court.

The relationship between claimants and Department of Work and pensions (DWP) staff has been poisoned, she said, and violent attacks on staff have increased. The PCS are against sanctions and have done considerable work to resist them, although the PCS is also under attack by the DWP as evidenced by the recent decision not to deduct members’ union dues at source.

Firman told the conference about the work that had been going on in Waltham Forest where people are having to be defended against evictions as a result of the cuts in housing benefit and the bedroom tax. Impressive action has been focused on local housing offices and we were shown a short film which reflected this.

A number of workshops took place before lunch. There was a session on sanctions, conditionality and the Work Capability Assessment and another on whether social security should be contributory or given as of right.

The two remaining sessions focused on unpaid work, including workfare, internships, apprenticeships and traineeships, and equality within the welfare state. Each workshop reported back its findings to the whole conference.

Common themes across the workshops included the need to stop exploitation and punitive social security policy and practice, recognising differences and the need for equality in experience of the welfare state and widening the idea of what we mean by contributory welfare.

The need for a living wage also cropped up in many of the workshops. Some serious work had gone on within a short space of time.

The afternoon kicked off with two presentations, one on the history of the Unemployed Workers’ Movement by Alec McFadden, who is president of Merseyside TUC and manager of the Salford Unemployed TUC Centre. Alec’s presentation was really interesting, however, sadly, the number of centres has now declined dramatically. 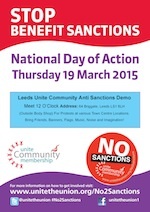 It was acknowledged that Unite Community is beginning to respond to the needs the centres once fulfilled across more parts of the country. Alec suggested that there might be more collaboration between Unite Community and the TUC in this area.

Richard Excell, the TUC’s Senior Policy Officer, reflected on the common interests between employed and unemployed workers, and on how Unemployed Workers’ Centres can break down the division between the two.

He noted the low level of unemployment benefit and the cruelty of sanctions, which are now affecting large numbers of children. He suggested that middle, mainstream opinion is probably against such treatment and can be mobilised. The fight on sanctions, he suggested, should also be linked to the question of low pay.

Further workshops looked at the idea of a welfare charter and how unemployed workers might be better organised within the trade union movement. There were also sessions on benefits in kind, such as energy allowances, and one on how bloggers writing on similar themes could come together. The chair suggested thatperhaps the conference had witnessed the inaugural meeting of the National Union of Bloggers (NUB)!

Bringing it all together

There was then an impressive attempt to draw the proposals of the conference together. The idea of a charter, for example, could include higher levels of benefit and the living wage, rent controls, ending sanctions and workfare, and looking at what is meant by contributory welfare, which could include the contribution someone makes to society through volunteering.

A role was envisaged for the model that Unite Community has developed as a way of organising unemployed people. More formal negotiation over this was endorsed by the conference. Trades Councils are to be encouraged to adopt the charter once it has been developed, and there will be a meeting on 25 March to take the proposals forward via a coordinating committee.

The role of Unite Community

Liane Groves, head of Unite Community, made the final address and gave a good overview of the union’s achievements to date. She emphasised the growth of Unite Community, which now has 8,000 members and 80 groups nationally. She particularly noted the success of the campaign on the bedroom tax and how some of its worse effects have been mitigated.

She also gave examples of various local actions which have involved Unite Community, such as Durham’s Socialist Clothing Bank, pressure on councils to seek compliance from firms who provide goods and services to adopt the living wage, the refusal in Southampton to allow a populist TV programme on immigration to go ahead and the links with industrial members.

Finally, Liane emphasised the importance of the campaign against sanctions and how success can be achieved in this area.

It was an interesting if exhausting day and new contacts were made and ideas absorbed. The work of our local branch can only be enriched and improved by the exchanges we had. The charter, good collective organisation and the battle against punitive welfare measures, particularly sanctions, seemed to be the important themes of the day.

Unite’s national day of action against benefit sanctions is being held next Thursday, 19 March. Click here for more information.

Read Gerry Lavery’s report for the ILP on the work of Unite Community here.