The recent news that there will not be a public inquiry into the events at Orgreave during the 1984-85 miners’ strike was described by Labour’s Andy Burnham as ‘an estabishment stitch-up’. GERRY LAVERY recalls what happened 32 years ago and reports on the campaigners’ determination to get justice.

The news that there will not be a public inquiry – or even a review – into the events of Orgreave in 1984 was described by Barbara Jackson, secretary to the Orgreave Truth and Justice Campaign (OTJC), as “devastating and shocking”. This reaction was delivered at an OTJC press conference at the headquarters of the National Union of Mineworkers in Barnsley on 1 November. In a defiant message to the government, members of the campaign made it clear that they would carry on until they get justice. 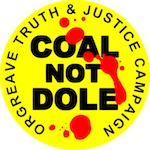 The decision not to hold an inquiry leaves important questions about the role of the South Yorkshire police and the Thatcher government at Orgreave unaddressed. We need to ask whether there is still a case for an inquiry, why it has been denied and where the campaign goes from here. Before trying to answer these questions, it is worth reminding ourselves of the events at Orgreave 32 years ago.

During the 1984-85 miners’ strike, thousands of pickets descended on the Orgreave coking plant near Rotherham in a bid to stop the delivery of coke to steel works in support of the strike. Some 6,000 police officers were determined to stop the blockade.

Campaigners for an inquiry believe the miners were ‘set up’ at Orgreave, in that they walked into a trap set by the police. Yet the miners continue to be blamed for the violence. Miners have maintained, however, that it was the police who launched unprovoked attacks on them and that BBC film footage of Orgreave was edited to show the miners throwing missiles rather than reacting to police provocation.

There are other serious concerns about the role and behaviour of the police. First, the police did not use the traditional defensive methods employed in industrial disputes. Instead, their approach was more militarised; it involved the use of dogs, horses, riot gear, armour protected vehicles, and the controversial tactic of ‘kettling’.

The nature of the police violence raises questions of real concern. It is obvious from the 1985 documentary, The Battle for Orgreave, for instance, that there is evidence of a particularly repressive and violent form of public order policing, whereby miners were targeted, baton-charged and seriously injured.

Orgreave campaigners also suspect there was political involvement in the operation. At the OTJC press conference, Mark George, a lawyer who has advised Orgreave campaigners and represented Hillsborough families, argued that the police would not have acted without Home Office involvement and that any inquiry should explore that. Political policing would, of course, undermine the traditional principle of police independence in operational matters. In theory, at least, the law should be applied impartially.

Following Orgreave, 95 miners were arrested on serious charges of riot or violent disorder. The charges were proved to be false and the subsequent court cases against them collapsed. It is clear that the police colluded over their statements. No police officer has been disciplined or prosecuted for these actions since Orgreave, however.

The human cost of what happened at Orgreave was significant for the miners. It was high in terms of the serious injuries they sustained, and many were detained in prison, lost work, and suffered from the impact on their families and communities.

In her statement to the House of Commons, Home Secretary Amber Rudd argued that there were insufficient grounds for a public inquiry into Orgreave. She stated: “Despite the forceful accounts and arguments provided by the campaigners and former miners who were present that day about the effect that these events have had on them, ultimately there were no deaths or wrongful convictions.”

Death and wrongful conviction are not the only grounds for an inquiry, however. As the OTJC points out on its website, “public concern” (Section 1 of the Inquiries Act 2005) is a key argument for a public inquiry. In light of the serious concerns highlighted both here and by campaigners, matters of deep public interest are involved. By refusing to hold an inquiry on the grounds she stated, Rudd raises something of a ‘straw man’. It makes no logical or legal sense to imply that death and wrongful conviction are the principal or only grounds on which she could have considered an inquiry.

It was pointed out at the OTJC conference that the police themselves would welcome an inquiry. Due to the lack of trust between former mining communities and South Yorkshire Police, there is a feeling on the part of the police that the ‘albatross’ of Orgreave would forever hang around their necks unless an inquiry is held.

In the context of the force’s involvement in Hillsborough, the case for an inquiry looks even more compelling. The call for an inquiry has also been backed by Alan Billings, the Police and Crime Commissioner for South Yorkshire.

Furthermore, evidence continues to emerge from former police officers involved in Orgreave of the police tactics employed there. Such testimony confirms that violent police tactics took place and that statements were orchestrated.

So why were the campaigners denied an inquiry? At the press conference Barbara Jackson revealed that when the campaign’s representatives met Rudd in September to press their case, they came away feeling optimistic. A follow-up email from Rudd’s private secretary was viewed as “very positive” by the campaigners.

At the time, there was also speculation in the press that Rudd may have been disposed to grant an inquiry of some sort, but objections began to emerge from people like Norman Tebbit, a key member of Thatcher’s cabinet (he recently described the miners as “a bunch of hoodlums”), and from the right-wing press. An article in the Daily Mail, colourfully entitled “Murder, rape threats, nail-studded cudgels and a mad Marxist set on destroying democracy – what inquiry into the Battle of Orgreave SHOULD probe”, was one example of how the right-wing press viewed the campaigners’ calls.

Shortly before Rudd made her ministerial statement, she rang Jackson to inform her of her decision. Despite the positive nature of the September meeting, Rudd’s decision was delivered in what Jackson described as “a cold and calculated” manner. Something had clearly changed.

The Labour MP for Sheffield Heeley, Louise Haigh, who attended the September meeting between Rudd and campaigners, has gone on record as saying that Rudd promised an inquiry of some sort. Haigh stated: “Her exact words were, she had to decide what format it [an inquiry] would take. It wasn’t a question for us of whether or not it would happen, it was in what form it would take.”

It has been claimed that Theresa May, who also received representations from the Orgreave campaigners when she was Home Secretary, was unlikely to back a public inquiry. It was suggested at the press conference that the government is protecting the decisions of its Thatcherite predecessors. In these circumstances, then, Andy Burnham’s accusations of an “establishment stitch-up” and “a naked political act” may not be far from the truth.

While much of the focus of the press conference was on the question of police behaviour and the role of the state in establishing a more politicised form of policing, the significance of Orgreave has wider dimensions.

The extraordinary events at Orgreave revealed a state hell bent on destroying the NUM, miners’ jobs and communities, and undermining any notion of policing by consent. This was a Thatcherite ‘scorched earth’ policy with a reckless disregard for the consequences, both socially and economically. The psychological scars of the assault at Orgreave can never be fully healed without some proper acknowledgement of the scale and nature of its impact on mining communities.

Thatcher‘s government was part of a neoliberal project. In his analysis of Thatcherism, Andrew Gamble characterises it as part of a project of creating a “free economy” through the use of a “strong state”, despite the contradiction inherent in such a notion.

According to the gospel of neoliberalism, the free market would be more efficient than the state and would deliver greater wealth for all by encouraging enterprise and competition. Reduced state intervention (although not for opposition groups like the Orgreave miners!) and expenditure, tax cuts and increased privatisation were seen as the way forward. As we now know, however, neoliberalism has been socially, economically, environmentally, and politically damaging.

The taming of the trade unions via a strong state was seen as a necessary part of the neoliberal project in order to break down resistance and progress towards a free market-oriented society. The miners were obviously viewed as a key part of such potential resistance, especially after the role of the NUM in determining the fortunes of the Ted Heath government in the early 1970s, so no expense or effort was spared in defeating them.

Thatcher and her government created a structure within which the police were given licence to use any tactics deemed necessary against the most resistant elements of the working class in order to achieve their objectives. It is worth remembering that one of Thatcher’s earliest actions upon becoming prime minster in 1979 was to increase police pay by 45%.

It is no accident, therefore, that the corrupt behaviour of South Yorkshire Police at Orgreave also paved the way for their behaviour in covering up the events of Hillsborough. They had, by that point, become habituated to behaving with impunity, mired in corruption, and skilled at the cover-up operation; behaviour that was allowed to thrive by Thatcher’s regime.

One possibility is to pursue a judicial review of the decision not to grant an inquiry. While barristers have offered their services on a pro bono basis, the defendants’ costs would have to be met by the campaigners if the case was lost. Jackson suggested the possibility of crowdfunding to cover the costs of that outcome.

Another option could be a people’s inquiry. Gaining access to police archives may be possible following the work of the South Yorkshire Police Commissioner in gathering them together in anticipation of a public inquiry. Jeremy Corbyn has promised an inquiry if Labour wins the next election. Members of the Home Affairs Select Committee have also raised the possibility of running their own inquiry into Orgreave.

Jackson told the press conference that ongoing support for the campaign is important, as the campaigners cannot carry on the fight alone. Many messages of support and donations followed the home secretary’s announcement, but more will be needed to take the campaign forward.

Gerry Lavery is a member of Unite Community and an ILP Friend.

You can find out more about the Orgreave Truth and Justice Campaign on its website or Facebook page.

You can donate money to the campaign using PayPal via the OTJC’s contact page.

Andrew Gamble’s The Free Economy and the Strong State: The Politics of Thatcherism (1994) is available from Macmillan.