Momentum is promising “the largest fringe event ever” at Labour Party conference in Brighton this month when it hosts a four-day festival called The World Transformed 2017.

This year’s event on 23-26 September follows the success of Momentum’s inaugural fringe festival of politics, art, music and culture at the 2016 Labour Party conference in Liverpool which was attended by more than 5,000 people and featured more than 150 workshops, talks, gigs and exhibitions. 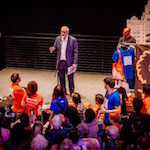 A similar format is planned for the 2017 event with a host of big names from the political left lined up to speak, plus a programme of “skill shares, debates, plays and parties that’ll redefine what it means to do politics and debate new ideas”, according to the organisers.

“With our movement close to power, it’s now time to get serious,” says The World Transformed website. “It’s time to work out precisely what our vision is, and how we could implement it.”

Among those who will be trying to do that are Labour leader Jeremy Corbyn, renowned marxist theorist David Harvey, journalist and author Paul Mason, filmmaker Ken Loach, academic Jeremy Gilbert, numerous Labour MPs and many other commentators, campaigners and activists.

Held across nine venues in Brighton, the programme is split into four ‘tracks’: Brexit, culture, democracy and economy.

The full schedule can be downloaded here while tickets can be booked in advance online.