MARIADO HINOJOSA reports on a day of tribute and remembrance in Valencia on Tuesday 14 May when one of the ILP’s most prominent Spanish Civil War volunteers was honoured with a specially commissioned plaque in the cemetery that holds his grave.

“His crooning of Scottish melodies could be heard accompanying difficult and monotonous hours in the trenches, as well as the political proclamations that shouted at the enemy lines. Perhaps it is coincidence, but during that period there were many fascists who defected from the ranks of Franco.”
Bob Edwards, member of the ILP Contingent and Smillie’s partner at the front

Like all stories of idealism and fraternity, this is also a story of love for life and reading, in its broadest sense. I have always been passionate about reading and that is how I came to know the figure of Robert Ramsay ‘Bob’ Smillie, many years ago. 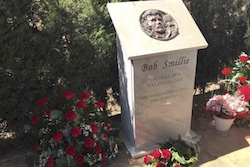 My discovery came through Homage to Catalonia by George Orwell, a book that fascinated me from the first moment, and was undoubtedly my first contact with the experience of international volunteers in the Spanish Civil War. The fact that part of its plot happened in Uesca, on the Aragon front, made me feel even closer, since I am a granddaughter of an Aragonese exile and the war and exile marked my family deeply.

While knowledge of, and real interest in the civil war is still a difficult subject for many people in Spain, the experience of international volunteers is less well known – another reason why I got involved in the recovery of Bob’s memory.

Smillie was a Scottish activist, member of the Independent Labour Party, and a grandson of Robert Smillie Sr, a renowned mining unionist and founder of the ILP.

The young Smillie became intensely involved in the workers’ struggle, officially joining his grandfather’s party in 1935. In 1936, after the news of the fascist coup in Spain, the young Smillie decided to abandon his promising career at the University of Glasgow to come and fight against fascism in a land he did not know, out of pure solidarity and internationalism.

He arrived as an assistant to John McNair, the ILP’s international delegate in Spain, but soon decided to become actively involved in the struggle. He left the offices of POUM on the Ramblas in Barcelona – where the official ILP delegation was based – and headed to Uesca to join an ILP contingent that also included Orwell.

Smillie’s story is captivating. Orwell describes him as a man of courage and passion, “the bravest of the volunteers”, as did some of his trench companions, whose statements I later read in other publications.

The strength of his human and poetic vision, in the midst of the barbarism of war, was captured by civil war historian Christopher Hall, who wrote: “When John McNair visited Smillie in the trenches, he asked which of all the guards he liked the most. Smillie replied that he preferred the one from five to seven in the morning because he could see in the distance the light of dawn reflected in the mountains of the Pyrenees.”

It would be this charisma and his absolute dedication to the revolution that led to Smillie’s tragic destiny. At the end of April 1937, he planned to return to his country for a propaganda tour in support of the Spanish revolution, but arrived in Barcelona at a moment of maximum tension between the partisan forces of the revolution – POUM and CNT – and the forces of the Communist and Stalinist left. 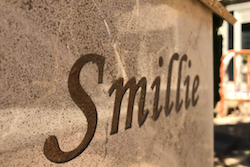 The so-called ‘May Events of 1937’ turned the city into a real battlefield between supporters of the revolution and the official republican forces, something Orwell masterfully portrays in Homage to Catalonia. On 10 May, Bob left Barcelona on the way to Figueres to cross the border but was stopped and detained by the republican authorities. The official version of what happened next suggests there was an administrative problem, but the fact is, he was moved to Valencia, then the capital of the republic – the first sign that something strange was happening.

After my discovery of Bob’s prison dossier last November in Valencia, some questions about his subsequent death have ceased to be such a mystery. This dossier clearly shows that Bob was imprisoned on 12 May and that he was detained by the general security forces. His arrest was clearly linked to the May Events, but there is also evidence that it was connected to that of another man, Domingo Aliaga, which proves that it was not a casual occurrence.

Bob was first questioned by the special services on 2 June 1937. A few days later he began to complain of abdominal discomfort and he died on 11 June, officially of peritonitis. Rumours quickly began circulating about the circumstances and many of his companions argued that his death was not an accident, but a result of negligence.

So, it seems, neither was his detention casual nor his death a mere accident.

After more than eight years of research, I decided that somehow Bob’s memory should be honoured, especially in the city of Valencia. Any mention of Bob always seems to focus on the causes and sensational events surrounding his death, rather than on the life of a young man who left everything behind to come and fight fascism. 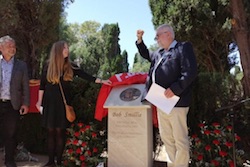 That is why, with this homage held in Valencia on 14 May, we wanted to celebrate above all the life of Bob Smillie, his involvement in the anti-fascist cause, his confidence in the revolution as the axis of the emancipation of the workers, and above all, the impact that his death had on his family.

During the tribute, the words of Bob’s relatives, Christine Wallace, Robert Smillie and, from a distance, Kane Smillie, gave us an idea of the impact that the loss of such a beloved man had on the family.

The speech by Frank Casey, the Scottish sculptor who made the plaque to Bob, was also emotional, while David Connolly, chair of the current ILP, gave us a portrait of Bob as a political man, relating the old struggles with current ones, in which fascism is once again surfacing with force.

We also heard from Richard Blair, son of George Orwell, who made an emotional contribution, based on words of praise from his father to Bob.

The closing musical act was performed by Valencian singer-songwriter, Ona Nua, whose emotional interpretation of two simple and appropriate pieces left us all speechless. One of them, ‘Sons of the People’, was an anarcho-syndicalist song of profound significance, which I chose as one of Bob’s favorites, while the other was the poem, ‘Homenatge anònim XV’ by Vicent Andrés Estellés, delivered with intensity, cadence and emotion to close a special moment.

Three days after the tribute, I still found it difficult to put into words all the emotions I felt on that day. Of course, all this would not have been possible without the invaluable help and collaboration of my friends, as well as the staff of the cemetery, to whom I am deeply grateful.

We can only remember and let ourselves be inspired. The memory of people such as Bob Smillie, young people who left everything behind for solidarity and idealism, is more necessary now than ever.

As McNair would write after Bob’s death, “Your name and your example will never be forgotten. Companions will be inspired by you in years to come. We will honour you as someone who gave his life for the class to which he belonged, always at the service of the workers of the world.”

Mariado Hinojosa is a writer and activist who organised the tribute to Bob Smillie in Valencia on 14 May. She is a member of FIBI-Ireland, Fundació Andreu Nin, the Orwell Society and the International Association of Women Philosophers.

She has published in The Volunteer; The Direct; New Culture; and Scholarship @ western from Western University-Canada. She is the coordinator of the travelling exhibition, ‘Memory Spaces: the International Brigades’.

This article was originally published on 20 May 2019 on the Ara Info website.

All photos by Mariano Hinojosa (@haizearenzizua).

You may also be interested to read this report of the event on the Orwell Society website.