BOB HARRISON reviews the evidence of unprecedented climate change and asks what can be done to slow global warming and mitigate its impact.

The Earth’s climate is unstable. It has gone through many phases over geological time, some of which have caused major life extinctions. During the Permian extinction 260 million years ago average temperatures rose by about 5°C and 96 per cent of life was lost. 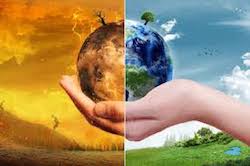 Our planet is now starting another rapid and dangerous period of warming, one induced by injections of man-made greenhouse gases into the atmosphere. The Intergovernmental Panel on Climate Change (IPCC) predicts that the Earth will warm by 4.5°C by 2100 while sea levels are already rising, polar ice caps melting and extreme weather conditions – including storms and heat waves – being felt across the globe.

Some commentators think we are on the brink of a sixth major extinction, one that will destroy populations and civilisations. Until recently, some predictions could be dismissed as speculation, but there is clear evidence now of rising global temperatures, demonstrating that we are changing the global climate rapidly.

David Wallace-Wells, the influential New York journalist, writes of melting permafrost releasing large quantities of methane, and discusses hydrogen sulphide leaking in some ocean locations, a most alarming development that was a feature of the Permian extinction.

A recent scientific literature survey found that only four of 69,406 authors of peer-reviewed papers rejected the hypothesis of man-made climate change. There is consensus that temperatures will rise between 1.5 and 4°C this century. And while we may be able to adjust to a 2°C rise, the World Bank reports that 4°C must not be allowed to happen.

It is accepted that irreversible change has already occurred, and the language is now about coping and mitigation.

So what can be done?

Individual actions on their own will not save the planet, so concerted collective action is needed. But all possible solutions are disruptive in the time scale required, and all are expensive. The most obvious are technological developments to decarbonise the energy economy.

Here are some of the most commonly proposed:

Nuclear power
Nuclear power stations with uranium-fuelled thermal reactors have lost favour in recent years following the accidents at Three Mile Island, Chernobyl and Fukushima. Nevertheless, there are about 450 power stations globally producing 11 per cent of the world’s electricity, while countries such as Sweden, France and Russia draw a significant proportion of their supply from nuclear.

However, uranium is a finite resource that’s rapidly depleting so it is not possible to avert global warming based solely on a major expansion of uranium-fuelled nuclear supply.

More promising are the so-called fast breeder reactors that convert uranium to plutonium and expand the uranium resource by many factors. Yet, despite experiments in France, Russia and UK, the technology remains unproven.

Thorium-based reactors also offer many advantages over uranium and do represent a long-term carbon free option. A prototype Thorium-based reactor operated successfully in the United States for a number of years in the 1960s, but again the technology is largely unproven.

Carbon capture and storage
Chemical technologies can be used to extract carbon dioxide from the combustion stages of industrial processes and power stations. The highly fluid gas is transmitted to disposal sites, such as deep aquifers and abandoned oil fields.

There are currently some small-scale experiments to prove the technology works and, potentially, the storage capacity is large – hundreds of years in the US, for instance. But it is expensive and there are doubts about gas being released from the aquifers.

Reducing carbon in the atmosphere
Where carbon capture and storage is not feasible because ambient pressures are too low, re-afforestation and the protection of remaining tree cover is of particularly importance. Recent events in Brazil are of critical concern.

Clearly, there are no easy answers and we cannot be sure if any of these, individually or together, will be enough.

Decarbonising will be disruptive and expensive. Cheap energy will be replaced by more expensive energy, so living standards will be hit, and it will be unpopular – a situation that democracies are not good at handling. This will lead to delay, denial, tokenism and, possibly, to some forms of eco-fascism.

The example of the Paris climate accords is not encouraging as only seven out of 195 signatories are currently within range of their emissions targets. Even if all targets were met, temperatures would still rise by more than 3°C.

Whatever workable technological solutions are called on to fix the problem, slowing climate change will require Herculean efforts by industrial corporations with the capacity to build Sizewell B and the Hubble telescope rapidly many times over.

There is not much time and there is a lot to do, but governments tend to regard climate change as an issue they can delay, talking of keeping temperature rises to 2°C by 2050, which in itself will lead to global disaster.

Frustrations with such lack of progress are already being aired on the streets by young people such as Greta Thunberg and the activists of Extinction Rebellion. Naturally, they are suspicious of governments and adults in general, but we ought to listen – Greta is telling us what our grandchildren think.

Bob Harrison was Professor of Renewable Energy Technologies at the University of Sunderland and is a member of North Durham Constituency Labour Party.

This article is based on the author’s brief introduction to a discussion on climate change at an ILP meeting on the politics of anger and protest in July 2019.