For some in the Party, Labour’s 2019 manifesto remains totemic, a badge of socialist faith that all the leadership candidates are being asked to swear allegiance to. For JONATHAN TIMBERS, however, it is one of main reasons Labour lost the election and demands careful scrutiny.

Labour wins elections when it convinces people that it can run the economy in the interests of the many not the few. 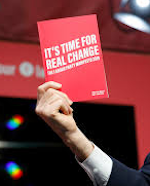 In 1945, an exhausted nation thought Labour’s nationalisation programme would result in a more efficient and co-ordinated economy. In 1964, Harold Wilson carried the electorate away with his ‘white heat of technology’ speech, promising economic planning and investment to boost productivity and wealth.

In 1974, the electorate trusted Labour to work with the trade unions to bring economic stability to a country full of industrial strife. In 1997, New Labour enjoyed a landslide with a promise to invest in our rundown public services and increase resilience to globalisation.

This broad economic vision – so essential to any election victory – must be communicated by Labour’s manifesto. If it isn’t, the opposite is true: Labour’s chances are diminished. While it may be true that few people read party manifestos, the picture the manifesto draws of the future workings of the economy under Labour is critical to election success. People are not stupid – they want to know how things will work when a government is elected.

This is particularly important when proposing radical transformation. First, they are sceptical because all they know nowadays is neo-liberalism and its tenets. Secondly, they are doubtful for the very good reason that building a new economy is a risky venture that requires careful thought and implementation. As a result, presenting them with a credible manifesto is absolutely critical to winning their trust.

Of the three reasons Labour lost the December 2019 election so disastrously, only the manifesto is still an issue. The two other reasons – Jeremy Corbyn’s leadership and our Brexit policy – are now becomingly increasingly irrelevant. Corbyn will soon be gone and Brexit will happen, whether we like it or not.

But the manifesto remains with us, and in some quarters, it seems to have become totemic – the manifesto is socialism and socialism is the manifesto. Candidates in Labour’s leadership election have had to swear allegiance to it. In particular, they have had to promise not to depart from its nationalisation plans.

This is a pity for three reasons. First, Corbyn’s greatest legacy should be Labour’s openness to new economic thinking. Secondly, nationalisation is arguably one of the least transformative proposals in the entire manifesto. The tax changes, Green New Deal and employee share ownership are potentially far more radical because they change the way capital circulates.

Thirdly, setting aside tax, the manifesto says little about the key issue – how to control, in David Harvey’s paraphrase of Marx, “the motion of capital”. So it falls far short of socialism.

Criticisms of the manifesto fall into three categories: presentation, implementation and bureaucratisation, the latter two being issues of substance and not just of presentation.

Rebecca Long-Bailey and Paul Mason have both argued that the problem with the manifesto was simply the way it was presented. 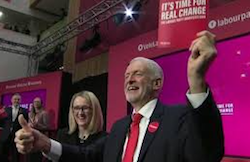 In a leadership debate in Dudley, Long-Bailey said: “We had transformational promises in our manifesto but no message that brought them all together.”

In his initial election analysis on his blog, Mason also expressed this view: “The move to the left on economic policy was not the major problem on the doorstep. Elements of it could have been sold better.”

However, in the same piece, he contradicted this position, quoting RH Tawney. Tawney called Labour’s 1931 manifesto “a glittering forest of Christmas trees with presents for everyone”. Mason suggested this was also an apt description of the 2019 manifesto, implying that it seemed extravagant and untrustworthy.

In his subsequent analysis in his e-pamphlet, After Corbyn, he goes further, observing that Labour lost partly because of “lack of trust that Labour could deliver its radical spending plans”. He goes on to argue that “where [the electorate, particularly working class voters] understood the promises, they chose not to believe them”.

This touches on the hegemony of neoliberal thinking, which the left must cut through to win support for radical policies. It also reflects Mason’s apparent disdain for sections of the traditional working class.

James Meadway, the architect of much of Labour’s economic policies, put it less dismissively: “Especially once the decision was taken to head in a remainish direction, we had to make the anti-austerity offer stronger – not in the sense of bigger (it was clearly bigger), but in the sense of more credible to the specific set of voters we had to persuade in our direction.”

He argues that Labour should have spent more time before the election identifying who would lose out to fund the policies: “Vague talk about targeting billionaires did not cut it – you need hard-nosed policy for this message to stick.”

It is worth noting that this approach rubbishes the view that the manifesto’s contents weren’t important because ‘not many people read the manifest’. Meadway rightly takes the position that having a credible economic policy is central to Labour’s success.

He points out that long before the 2017 election Labour had made a strong commitment to controlling its spending plans by adopting the fiscal credibility rule, developed by former treasury official and radical economist, Jonathan Portes. Labour’s move away from this to a new fiscal rule happened during the election campaign, which left many people unconvinced.

In his comments, Mason hints at a deeper pragmatic issue with the manifesto: its implementation. He says there were too many promises and not enough narrative about how they could work to change people’s lives for the better.

Meadway also treads this path. Even though he says “this isn’t an argument about the content of the policy as such”, it clearly is. He comments: “It was simply not clear what a Corbyn-led Labour government would do first, if elected, out of its big list of promises.”

I think this is more than just a matter of presentation. It is about how you successfully implement policies. If you can’t do that, you can’t govern effectively. When people like Jon Lansman point out that the manifesto would take at least 10 years to implement, and wasn’t therefore a realistic programme for government, then it is time to sit up and take notice.

Medway goes on to say that when Labour did try to suggest what its priorities were, they got them wrong. He refers to John McDonnell’s speech about the first 100 days of a Labour government, arguing that McDonnell should not have prioritised renationalisations.

In Meadway’s forceful words: “does anyone, beyond a small number of the truly committed, genuinely believe that bringing these institutions into public ownership is a priority for a new government? Sure, it’s all popular, but very, very few people will ever say they are a priority.

“Putting the NHS back on its feet. More money for education. Social care sorted. Some big, forward-looking offers around jobs and rights at work. All of them are high up on the list of things to do for me and millions of other Labour voters. Nationalisation doesn’t come close.”

This is a view that some on the left, including Long-Bailey, need to chew on. Meadway is no centrist.

Clearly, policies such as renationalising the utilities under worker and consumer control are not things you can do at the drop of a hat. Remodelling entire institutions, in untested ways, is not just something you can buy off the peg. Why should the electorate believe these promises – particularly because we claimed we could improve efficiency and cut costs immediately – when there remained real questions about implementation?

In the words of Jonathan Portes, in a Twitter conversation with me, the manifesto consisted of “some good things, some dubious things, but overall not plausible that it could have been delivered – not because of money/costings, just trying to do far too much with limited state capacity”.

This brings us to the question of the ‘dubious’ parts of the manifesto. Not everybody on the left was as enthusiastic about Labour’s policies as Meadway.

Aditya Chakraborttty said: “In the era of taking back control, Corbyn offered yet more direction from Westminster, with utilities run from the centre and hundreds of billions disbursed from remote state institutions. Many of these ideas are interesting, but few of them were properly worked through and none patiently argued for.”

Any community that has endured the threat of HS2 or had dealings with Network Rail will know there can be serious issues with state-run projects and institutions. Overcoming these takes more than rhetoric about worker and consumer control. 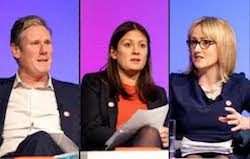 As Lisa Nandy has pointed out, this may require a different approach entirely. This is one where the state, both locally and nationally, works with communities to develop partnerships and extend social ownership (such as the Preston model for local procurement or Nandy’s own plans for socially owned energy producers). There is a lot that can be done but it has to be shown to work.

It has to be taken seriously and rebutted. Where this is difficult, then the risks must be acknowledged and mitigating strategies put in place. For example, it has a point when it observes: “It is … doubtful whether transforming an entire industry top to bottom, especially if it includes experimentations with novel, ‘democratic’ management structures, can be costless.”

It highlights a risk that “where the outcomes are decided collectively, presumably via a localised mechanism for deliberation like a representative committee, citizen’s assembly or a one-off referendum … collective decision-making mechanisms are not always less ‘oppressive’ than market relationships – both are relationships of power, except in a collective decision-making mechanism, the currency would be time, belonging to a union, knowing the right people, etc.”

This is a very real risk, which has materialised in practice again and again, though it is good to see Policy Exchange acknowledging that market relationships can be oppressive.

What the left constantly struggles to see is the difference between Gramscian ‘common sense’ (disparate hegemonic ideas) and ‘good sense’ (a reformed, coherent common sense achieved through clear evidence-based analysis).

Having ‘good sense’ means developing a critical faculty that can take on board inconvenient truths. A good example of this is Andrew Cumbers’ book Reclaiming Public Ownership, which confronts and accepts some of Hayek’s pro-market philosophy, before going on to propose a completely different economic order from any Hayek would have supported.

This lack of ‘good sense’ needs to change. Before the election, there was remarkably little discussion about the economics behind our policies. That in turn meant we could not communicate them to the electorate before the election or show how they might work in practice through developing local models relatable to national plans.

This all takes time. We need to show that we can develop solutions that address people’s issues. This long road starts with education and activism.

It also means acknowledging that we may not yet have all the answers and can learn things from others. I believe that requires a new culture in the party, which focuses on policy debate and practical local activism. That discussion must be open; we must all be prepared to re-evaluate our most cherished assumptions in the light of evidence.

This does not imply that we should abandon our anger at the injustices of capitalism or the way it debases social relationships. It does imply, in the words of Stuart Hall, quoting Gramsci, “you have to attend, ‘violently’, with all the ‘pessimism of the intellect’ at your command, to the ‘discipline of the conjuncture’ [the moment when history decisively goes against you]”.

If the left fails to do that, it will lose forever. The 2019 election was a moment of conjuncture for the Labour Party, another 1979, when large sections of the working class moved away from us. Essential for our renewal will be rigorous questioning of our economic policies and the 2019 manifesto.