A new grassroots network of Labour left groups has urged socialists not to leave the Party but to stay and help re-unite the left following December’s general election defeat and Keir Starmer’s rise to the Labour leadership.

Red Labour, Jewish Voice for Labour (JVL) and the Labour Representation Committee (LRC) have released a joint statement calling on members not to leave but to “organise … for a broad left network”. 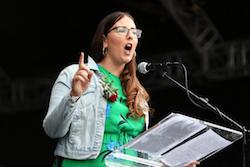 The statement is also supported by figures such as ex-MP Laura Pidcock (left), council group secretary Jo Bird, and retired ASLEF president Tosh McDonald, as well as the Bakers’ Union.

It argues that: “The loss of the general election, the resignation of Jeremy Corbyn, and the defeat of the left in the NEC elections, together constitute a major setback. But we are not defeated. We are also working in the unprecedented landscape caused by Covid-19 and the government response to this health emergency.

“So we urge all socialists to stay in the party, contribute to the efforts to re-unite the left, and be part of a renewed focus for mobilising to demand the society we need for the many.

“One great achievement of the Corbyn period was to bring the left together into a force able to influence the terms of debate, to mobilise for and win a left-orientated NEC and get radical motions passed at conference.”

“We reaffirm our commitment to the Labour Party which remains, through its historic connection with the trade union and labour movement, the most important expression of the organised working class and a voice for the many…

“Socialists in the party need to work together, in coalition, now more than ever. Alongside others in the Labour Party, we will help rebuild the left around a new, national network, which will be a place to organise, educate and debate in order to deliver the socialist society we all need.

“We commit to democratic and transparent organisation; working to democratise the Labour Party and the trade unions; defending party members against unjust disciplinary processes and supporting the self-organisation of groups contesting particular oppressions.”

You can read the full statement here.