In his new book, the shadow justice minister and MP for Tottenham claims we need to reach across society’s tribal lines to create inclusive and dynamic communities. BARRY WINTER reviews David Lammy’s Tribes.

David Lammy, MP for Tottenham and now Labour’s shadow justice minister, has written a lengthy and formidable account of our society’s growing social divisions – and how they might be overcome. He argues that we are entering a new era of polarisation which he defines as the “new tribalism”. These tribes are profoundly hostile to those they consider to be outsiders, as not belonging. 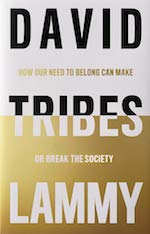 Drawing on his own experience, he writes: “Barely a week goes by in which I do not receive a death threat or some piece of racist abuse.” He also reminds us that the MP, Jo Cox, was shot and stabbed by a man shouting “Britain first”.

He writes: “To the tribe, anyone outside its physical and conceptual boundaries is an outsider, even an enemy.” This is not exclusively to do with ethnicity but is a backlash against our “atomised and individualistic societies”.

For him, “The reforms begun under Reagan and Thatcher are the key drivers of the new tribalism.” The era of ‘neoliberalism’ and the resulting desire to belong to a particular tribal group has generated deepening social divisions. He writes: “Markets became stronger, but our communities became weaker.” Individual success, not communal advance, became the goal.

In that sense, the new tribalism is a backlash against the era of individualism and “often the product of the tensions and splits in the modern world”. For example, the rate of depression among teenagers “has shot up to 70 per cent since the early 1960s” and 2.4 million people in the UK suffer from chronic loneliness.

He affirms that people have a desire for belonging but this has been taken to extremes with a focus on exclusive, often ethno-centric identities. In response, there needs to be a politics of the common good, “an urgency for our communities and nation to find new ways of bringing us together”, he writes.

What is missing in England, he argues, “is any arena that allows those with competing visions for our future to communicate and share experiences across social classes, which would provide us with the opportunity to arbitrate our differences and remind us what we share in common.” He calls for “a new politics of the common good”. “We must recognise that as citizens we have something in common too.”

While I agree with the general drift of his argument here, he does not take into account that there are differences of interest between the super-rich and the rest of society. Lammy himself was deeply critical of the failure to safeguard the lives of tenants of Grenfell Tower where profits took precedence.

That said, much of what he proposes is positive and worthy of consideration. He argues that local government has become impotent due to “massive cuts”. He calls for re-empowering local government and strengthening our neighbourhoods.

He also wants the regions in England to have much greater control. He quotes the UN’s special rapporteur on extreme poverty, Professor Philip Alston, who wrote last year: “The bottom line is that much of the glue that held British society together since the Second World War has been deliberately removed and replaced with a harsh, uncaring ethos.”

He also refers approvingly to the comments of former Labour leadership candidate Lisa Nandy, who wrote: “Only real devolution will provide a remedy, not the city-centric model of George Osborne, which concentrates investment in cities in the hope that trickle-down effects will be felt by surrounding towns.”

Lammy calls for what he terms civic nationalism rather than ethnic nationalism. For England, he advocates citizens’ assemblies, arguing that these assemblies “are becoming increasingly popular tools to supplement representative democracy across the modern world”.

Perhaps more controversially, he calls for the introduction of a compulsory national civic service. He says: “A year’s service would be an invaluable tool for young people to make connections and to create networks, as well as to learn social and practical skills that would inevitably benefit them later in their careers.”

His conclusion stresses the need to reach across society’s tribal lines. As he puts it: “Together, we can replace tribes with inclusive and dynamic communities of which we can be proud. Together, we can create spaces and places to belong.”

Tribes: How Our Need to Belong Can Make or Break the Good Society, by David Lammy is published by Constable (2020) and costs £20.