MIKE WADSWORTH reports from the Norfolk coast where a region that relies on tourism fears a visitor-sparked second wave of Covid cases if lockdown is eased too much too soon.

The borough of Great Yarmouth in Norfolk stretches from Hopton, just over four miles to the south, to Winterton, eight miles north (round here, we forget about the “on-Sea” tag for these villages along the east coast – a purely Victorian invention to attract the tourists). Yarmouth itself is on the east coast but the borough also reaches 10 miles west, almost to Acle, half-way to Norwich. 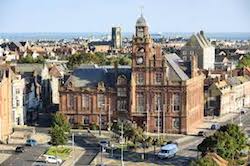 Yarmouth is among the top 10 most deprived district councils in England and Wales, and like many areas in the UK, contains areas of poverty and wealth almost side-by-side. Since the 1950s, its economy has been heavily dependent on the holiday trade, although there were great hopes of an expanded economic base in the 1960s, with the discovery of the North Sea oil-fields and, more recently, with the slow expansion of off-shore wind-farms generating renewable electricity.

Deaths caused by the pandemic in Norfolk are lower than in more urban areas of the country, such as London and Manchester, but there is a wide variation between neighbouring villages.

Figures from the Office for National Statistics (ONS) show that from early March to mid-April the area around Fleggburgh, Billockby and Martham had the highest percentage of deaths from Covid-19 in Norfolk. In this area, 36% of deaths were due to the virus, while in nearby Hemsby only 0.44% of deaths in that same period were due to Covid-19. Likewise, in nearby Caister and Ludham, virus-related death rates were also low.

Such a variable pattern in neighbourhood level data suggests that easing the lockdown at different rates in different areas of the country would be extremely difficult, if not completely impracticable.

Meanwhile, many neighbourhoods in Norwich have not had any deaths due to Covid-19 while in some districts just outside the city, such as Rackheath, Thorpe End, Salhouse and Wroxham, the death rate is 22% – among the highest in the county.

National figures from the ONS indicate that those living in the poorest parts of England and Wales have died at twice the rate of those in the richest, but according to these statistics, some of the poorest neighbourhoods in Great Yarmouth and Norwich have very low death rates.

High death rates have also been linked to age, but north Norfolk, which has the oldest population in the country, has among the lowest death rates in the county. Some caution may be needed here, however, as deaths in care homes may well be under-reported.

In Great Yarmouth itself, there has been a very positive response to getting food supplies to those unable to leave their homes or in dire financial circumstances. The Town Hall has been used as a collection point for donations of food, with one local garden centre donating three large vans of food, which otherwise would have gone to waste.

Meanwhile, the borough council has distributed almost £20m in financial aid to 1,722 local businesses (57% of all those businesses in the area entitled to government grants) and much work is being done to encourage businesses to take up this funding.

Reactions to the handling of the situation by central government has been mixed. Before the lockdown was eased, opinions of Boris Johnson ranged from enthusiasm to grudging respect along the lines of: “At least he’s not Trump”. With the lockdown partially eased opinions have changed to the slightly less admiring, as many feel the moves have come too early and there will be a ‘second wave’ of the pandemic.

In particular, there are great fears of an influx of people from areas like London where there is a high rate of virus-related deaths, which will raise the rate in the town. Generally speaking, people also feel the advice from central government is impracticable.

Criticism from opposition parties in the area has been muted, which is understandable to some extent in that ‘normal’ political life has been suspended for the time being.

Regionally, just as nationally, there has been criticism from public sector unions about the lack of PPE for front-line NHS staff, although there has not been much reaction yet to the suggestion that there might be a two-year pay freeze for public sector workers.

We are certainly living through ‘interesting times’.

This is the eighth in our series on local responses to the coronavirus crisis. Previous reports come from Croydon, Dronfield, Calderdale, County Durham, Beverley, Hackney, and Lancaster & Morecambe.
You can find them all here.