Why has the UK failed so conspicuously to cope with this pandemic? HILARY CAVE points the finger at decades of neoliberalism and 10 years of Tory-led austerity.

The Covid-19 pandemic is wreaking a toll on lives, livelihoods and living conditions, and some sort of inquiry into how the government and public services have performed now seems inevitable. But many of the problems have been years, if not decades in the making.

As we endure bereavements and the impossibility of living normal lives, more and more voters may come to realise how seriously the NHS has been starved of resources since 2010. It’s a sorry tale.

Since 2005 the National Security Risk Assessment Committee has categorised an epidemic as the top threat facing the country, along with natural disasters such as flooding. Nuclear war was graded as a lower risk. Tony Blair boasted that year that the World Health Organisation (WHO) had recognised the UK as one of the nations better prepared for a pandemic.

So how have we sunk to become a country that has failed so conspicuously to cope with this pandemic, and to have what may well be the highest death rate in Europe?

Across Europe and the world, neoliberalism led many governments, including ours, to neglect their health services in order to spend less. In the UK, every coalition and Conservative government since 2010 has systematically starved the NHS of the funding required to keep up with the needs of our increasingly elderly population and the technological and pharmacological advances in medical care.

The UK has lost 100,000 doctors and nurses over the last 10 years, together with 17,000 beds, while community hospitals have been systematically closed down and nurses’ training bursaries scrapped.

Nationally, we now have fewer hospital beds than similar countries but continue to spend vast sums on weapons of war. In Derbyshire the clinical commissioning groups (CCGs) worked for several years to cut 523 hospital beds in acute and community hospitals.

Lack of funding has not been the only cause of our poor performance, though.

During the decades straddling the end of the 20th and start of the 21st centuries, various governments encouraged private companies to enter healthcare, a process accelerated dramatically by the 2012 Health and Social Care Act, authored by Andrew Lansley, then the Conservatives’ Secretary of State for Health.

The Act created the biggest change in our NHS since its inception in 1948. Not only did it establish Public Health England (PHE) as a new executive agency of the Department of Health, with its own budget and management, and less accountability. But for the first time, it ensured that the Secretary of State was not obliged to provide for the health of citizens.

Indeed, the Act obliged CCGs to make their commissioned services open to tendering, so enabling private companies to provide services and fragmenting the NHS. Even some NHS service providers have set up wholly owned companies in order to save money.

This means, for instance, cleaners, porters, and security staff at Chesterfield Royal Hospital no longer work for the NHS, but for a private company that is already employing new starters on inferior terms and conditions.

In theory, the NHS long-term plan issued in 2019 officially abandons the policy of competition in NHS England. In reality, however, it does not prevent private providers getting contracts, it merely no longer forces this to happen.

NHS England, now merged with NHS Improvement, seems to be on a zigzag course. Behind the scenes it has teamed up with NHS Shared Business Services (SBS), inviting companies to tender for an NHS ‘framework contract’ through which trusts can buy-in services without going through a full procurement process.

John Lister of Coventry University has described this process as “batch privatisation”, warning that whole units or services delivering patient care might be outsourced quickly in this way.

The effect of these polices has been evident throughout the pandemic when ministers have used special powers to bypass even normal tendering patterns. Contracts have been awarded to private companies and management consultants without open competition.

Serco and G4S will apparently undertake much of the contact-tracing work, for example, recruiting 15,000 call-centre staff, with plans to offer them one whole day of training before starting work.

At the London Nightingale, services such as cleaning are provided by private companies, who will presumably sack their workers now the hospital is being mothballed. Capita has been running the vetting service for retired doctors who volunteered to return.

The gross shortages of PPE for frontline health and care workers also has its origins in government decisions from the recent past. 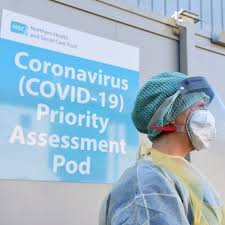 In 2016, a three-day epidemic simulation called Exercise Cygnus uncovered a significant shortage of PPE, critical care beds and morgue capacity in the UK. But in the years following, these shortcomings were not addressed.

Indeed, between 2016 and 2019 the value of goods held by the government in case of emergencies fell by more than £200 million. In 2019, the government was warned that gowns were missing from epidemic stockpiles, but again did nothing to fill the gap.

More recently, the government missed out on the opportunity to join an EU-wide attempt to bulk-buy ventilators because it wanted no part of an EU initiative. One very senior civil servant told the House of Commons Foreign Affairs Select Committee that this decision was made on political grounds before later withdrawing his statement. The EU was said to be “astounded” by our government’s later explanation that an email had gone astray.

In general, the UK’s procurement system has been a mess. For example, the procurement of NHS goods is managed by NHS Supply Chain Co-ordination Ltd, a company owned by the Department of Health, which apparently had no previous experience of buying goods from overseas.

At the end of March, the body representing health procurement professionals discovered for the first time that gowns to protect health staff had not been included in PPE stockpiles. Deloitte seems likely to be given the task of centralised procurement of PPE.

At the end of April BBC Panorama revealed that the Health and Safety Executive (HSE) requires those working in a situation with risk of “high-consequence infection” must wear face-covering visors, eye protection, gowns and gloves.

Health and social care workers in contact with Covid19 patients clearly fall into this category. Yet the government, claiming it is following SAGE advice, recently downgraded Covid-19 from the status of a “high-consequence infection” so that wearing such PPE is no longer mandatory.

Meanwhile, doctors and nurses, working long shifts in a high-risk situation with scandalously inadequate PPE are dying in substantial numbers, as are other healthcare staff. Understandably, they are frightened for themselves and their families. And they are angry.

They are also grieving for dead colleagues and for the large proportion of patients who have died. Altogether they are bearing a tremendous physical and psychological burden that may leave them with post-traumatic stress disorder or other forms of mental ill health.

It is perfectly reasonable to conclude that, despite politicians’ rhetoric, healthcare workers are essentially being treated as though they are disposable.

As Tony O’Sullivan, a retired paediatrician and co-chair of Keep Our NHS Public, has said, this crisis has highlighted a decade of underfunding while centralised decision-making and the outsourcing of huge responsibilities for public safety to private companies has simply added to government mistakes.

If we are to defend the NHS to protect and improve the health of our people, we must take action to bring about radical change.

Hilary Cave is a member of the Chesterfield Save Our NHS campaign, part of the Derbyshire Save Our NHS network and linked to Health Campaigns Together.

This article is an edited and shortened version of a piece that originally appeared on ‘Three Score Years and Ten’, the blogsite of former Labour MP Harry Barnes.