Last December Labour returned only one MP in Scotland for the second time in three general elections and it’s been out of power in Holyrood for 13 years. The time has come for change, say DANIEL DEERY and CIAN IRELAND, or the party faces continued decline.

The polarisation of Scottish politics along constitutional lines has left Labour at a crossroads. To swing momentum back behind the party so it can once again represent the Scottish working class it urgently needs to reassess its position on a second independence referendum, to rebuild its local electoral machinery and to provide a true alternative on economic and social policy.

The constitution is undoubtedly the most important factor in Scottish politics today. As the country splinters into nationalist and unionist camps, Scottish Labour is caught in a position that doesn’t appeal to anyone beyond its dwindling core base.

There are two clear and differing positions in the party on the constitution. On the one hand, there are those who argue Labour shouldn’t focus on independence, but instead concentrate on bread and butter issues to improve the lives of working people and build a new base.

While commendable, this position hasn’t paid dividends electorally. Indeed, despite supporting Labour’s ideas, the people of Scotland have continued to vote along constitutional lines.

The other dominant position is held by the British nationalists who believe Scottish Labour must become a hardcore unionist party and push opposing ideas to the margins. Believing voters are put off by Labour’s perceived ambiguity, similar in many ways to Brexit, they say the party must stick to its guns and defend the union.

While the conviction is admirable, there are two problems with this argument. First, it seems unlikely Labour can replace the Conservatives as the dominant unionist party. And secondly, much of what should be our natural base no longer believes Scotland should remain in the UK.

We believe both positions have failed. The party needs to examine seriously its attitude to the constitutional issue so it can regain the trust it has lost among its traditional supporters and oust the failing Scottish Nationalist government. Labour cannot sideline the issue nor can it choose a position that alienates large sections of the working class who loyally support independence.

Luckily, an alternative is already developing. Both Neil Findlay and Monica Lennon (pictured) abstained on the Holyrood vote to hold a second independence referendum, while Unison has publicly backed a referendum. 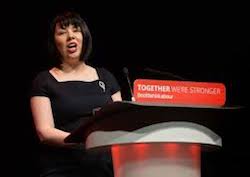 Both events signify a growing alternative position within Scottish Labour, one that argues for support of a referendum based on self-determination and rebuilding the electoral base. This would allow it to win back support among people disaffected with the SNP government who currently wouldn’t vote Labour on constitutional grounds. It would help Labour re-establish trust among those who should be our natural supporters, people who have been continually let down by both governments.

An Edinburgh University report into why Scottish Labour lost the 2019 election backs up this position, highlighting the fact that voters “currently less hostile to independence were significantly more likely to leave the Labour Party”. Supporting a second independence referendum and ensuring people sympathetic to independence vote Labour is crucial.

This position isn’t about alienating unionists within the movement, it’s about creating a party that has open discussions and debates on constitutional issues while uniting everyone around a call for change. The party can, and probably should, continue to support a unionist position in the second referendum, but to deny self-determination is an electoral and ideological mistake that only lends credibility to the SNP’s false insurgent posturing.

Much has been made of the SNP’s Teflon nature. Despite continued scandals and regressive politics, nothing has stuck. Addressing the constitutional issue and removing this veneer of insurgency around the SNP could help Labour to challenge its dominance.

Unfortunately, Labour seems intent on repeating the mistakes that undermined its standing north of the border in the first place. Working with Tories is deeply unpopular in Scotland, as the 2015 election showed following Labour’s involvement in Better Together.

Yet in May this year, the SNP did exactly the same, siding with Tories to vote against collective bargaining in care homes, access to contraceptives without prescription, basic rent controls and other moderate reforms in favour of working people.

Scottish Labour doesn’t need to change its policies to oppose such a stance. It already is. Indeed, some Labour MSPs are refusing to stand by in silence. From Monica Lennon leading the fight against period poverty to Pauline McNeil holding the SNP to account over siding with landlords against tenants, Scottish Labour is positioning itself on the side of ordinary people simply by sticking to socialist principles.

If it changes its position on the constitution to accommodate voters supportive of an independent Scotland, it could begin to erase the shine of the SNP government and become the movement for change.

Such a strategy must be built around the notion of self-determination, not just on the national question but in economics as well, and as a way of opposing the creeping centralisation of power in Edinburgh. Policies such as free public transport, rent controls, funding for co-operatives, and many other measures, are needed now more than ever following the coronavirus crisis. Only Scottish Labour, unburdened by corporate funding and special interests, can provide them.

By taking stances such as these, Labour could put its socialist principles into action, remaining committed to its traditions while building new support as the insurgent movement against Tories in London and Nationalists in Edinburgh.

Of course, being correct won’t change things if Labour is not organised well enough to take the message to its communities. Our experiences in Stirling during the 2019 election, and conversations with members elsewhere in Scotland during and after that campaign, have made it clear that there are structural problems the party must address. 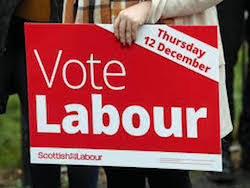 Labour had a base of young and energetic new members, but many were unprepared meaning significant time during canvassing sessions was spent teaching people basic skills. This was not an efficient use of limited time. Members need to go into an election with such skills in-hand so time can be spent campaigning and getting out the vote.

While the dedication of Labour volunteers helped to hold up its vote in many areas, it clearly wasn’t enough on its own. If Scottish Labour is to win again, its must match that enthusiasm with the necessary skills. Scottish Labour no longer has the luxury of being able to take votes for granted, we must earn them.

Luckily, several local candidates and CLPs have already taken steps in the right direction. In Glasgow, local parties such as Maryhill and Springburn have been creating strong links to their communities simply by showing up to events and holding regular bi-weekly campaign sessions (before the current crisis, of course). They have also built a core group of campaigners and activists who can do this work.

Every CLP must find a format that best fits their own needs, but this is a model we hope to see replicated across the Scottish party. Well trained volunteers, an active and engaged local party and, most importantly, strong local candidates who are embedded in their communities will be crucial if Labour hopes to re-grow.

Once it has rebuilt CLPs, it can focus on developing local campaigns. Labour didn’t come to prominence initially by taking power at a national level, it did so through sustained local campaigning, by organising tenants’ rent strikes and labour strikes, and through effective governance of local councils. We cannot expect to return to power nationally without a renewed focus on such local issues and representation.

It’s heartening that Labour has already had some success in these areas, amending legislation to allow municipally owned bus services, for example. Now it needs to mobilise campaigns to ensure municipal ownership is implemented by councils, using models of democratic and worker ownership.

By pushing socialism at a municipal level, Labour can provide a clear alternative to centralised power in Holyrood, so empowering the people of Scotland directly. Our communities are hurting, and Scottish Labour is at its best when it’s representing them, offering remedies to their pain.

The closure of the Caley Rail works provides another example as Labour stood with working people against attacks on the local community and industry. Here, former Glasgow North MP Paul Sweeney helped lead a vibrant campaign rooted, not in Holyrood or Westminster, but in the organisations and unions of the people affected.

Although the Scottish government refused to step in and save this vital workplace, the campaign, and many like it, showed the way forward for Labour. Rooted in communities and localism, Labour can again be the party Scotland turns to when the sheen of nationalism wears off.

In his foreword to the ILP pamphlet Labour in Crisis, written by Eric Preston in 1982, Labour MP Eric Heffer wrote that “all important political organisations go through periods of severe crisis, the outcome of which either renews and rebuilds them or signals their decline”. Thirty-eight years on these words have never rung truer.

Scottish Labour is learning the hard way the realities of such a crisis, the severity of which is unmatched by any other since the betrayal of Ramsay MacDonald. Correct decisions must be made now to ensure Labour in Scotland takes the path to renewal, not the path of continued decline.

Scottish Labour has many weaknesses and its problems are serious. But there are many positive signs that ought to give us hope for the future. We must harness these and learn from what works and what doesn’t.

Undoubtedly it will be hard work. But if Scottish Labour can address the constitutional issue and rebuild locally, united around the goal of a socialist society, it can again start to shape a future the people of Scotland deserve.