For MARIA GOULDING, John Clare’s poetry is not only uplifting and restorative, but deeply relevant in our age of environmental uncertainty and social unease.

I think John Clare’s ‘The Nightingale’s Nest’ is one of the loveliest poems I have ever read. And re-reading it during this time of crisis has been even more uplifting for me than it was before. 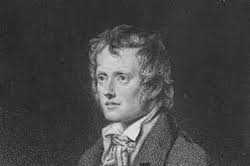 Clare is chiefly known for his wonderful nature poems but actually his work is very varied – many nature poems are full of delight but some also speak of loss and anger at what was happening to the countryside, and some tell of deep personal distress. Much of his poetry is available online so we all have these treasures at our fingertips.

If poetry is not your thing then just let Clare take you with him into the brambles which surround and enclose the nightingale’s nest. We are usually held at a distance in poetry but here you can feel yourself creeping through the undergrowth in search of the elusive bird:

Up this green woodland-ride let’s softly rove
…
Hark! There she is as usual – let’s be hush
…
There! Put that bramble by –
Nay, trample on its branches and get near

Clare worked as a farm labourer from childhood and had a scant education up to the age of 12. His detailed descriptions reveal how closely he observed the natural world and how careful he was to choose just the right words to convey its variety and beauty.

Here’s how he describes the nest:

… no other bird
Uses such loose materials, or weaves
It’s dwelling in such spots: dead oaken leaves
Are placed without, and velvet moss within
And little scraps of grass, and, scant and spare,
What scarcely seem materials, down and hair

He was also acutely aware of the bird’s reactions as she senses the intruder:

… and now, near
Her nest, she sudden stops – as choking fear,
That might betray her home

The reader has the impression of someone completely at home in the natural world, roaming the countryside and sensitive to all its creatures. I can’t help feeling that as a poor countryman he identifies with the nightingale:

Despite her humble peasant-like appearance, she has the most beautiful song:

Her wings would tremble in her ecstasy
And feathers stand on end, as ’twere with joy,
And mouth wide open to release her heart
of its out-sobbing songs

Is this him, the peasant who was taken up and fêted by the glitterati in London for his poetry? Throughout his life, Clare was torn between his roots in Northamptonshire and the literary life in London. He ran through money and could not support his wife and seven children, suffering severe mental illness which caused him to be committed twice to lunatic asylums.

There is no hint of his distress in the nightingale poem, but the conflict is clearly there in the famous poem ‘I am!’ and the lesser known sonnet ‘I am’. The explanation mark is important in the first poem as he is declaring his existence, despite his woes:

I am – yet what I am none cares or knows
…
I am the self-consumer of my woes
…
Even the dearest that I loved the best
Are strange – nay, rather stranger than the rest
…
I long for scenes where man has never trod
… Untroubling and untroubled where I lie
The grass below – above the vaulted sky

Clare conveys his anguish and isolation intensely in this deeply sad poem, and at the end we can see that he craves to be out in the open air, gazing at the sky and finding an almost religious sense of release.

This chimes with everything we know about the restorative power of nature and the importance of being in green spaces for those with anxiety and depression. 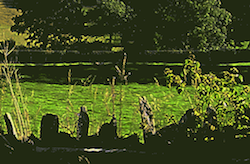 Indeed, on the BBC’s Springwatch this month Chris Packham conducted a scientific demonstration to show the benefits of being out in the open on the brain’s chemicals. I wonder if reading this poem with those who have experienced mental distress could vouch for its veracity.

Part of the cause of Clare’s mental illness may have been genetic but it is also clear that growing up at the time when common land was being swallowed up by enclosures had a devastating effect upon him.

Although Clare’s childhood was spent in the last throes of a system that allowed paternalistic landowners to keep their workers in poverty, the labourers were able to supplement their paltry income. They grew vegetables, could keep a cow or collect firewood on the common land where Clare was able to wander and observe nature freely.

He often included this personal experience in his poetry, never more so than in ‘The Fallen Elm’. He wrote about two elm trees near his cottage, felled to make way for new agricultural methods that prioritised efficiency over custodianship of the natural world, and then wove his sense of loss into the poem.

At the start we have a cosy description of the old elm, metaphorically safeguarding the cottagers, as a storm rages outside:

The tree represents continuity, steadfastness and stability. Over the years the tree had seen many storms and experienced the rhythms of life unfolding:

Summer of thirst parched round thy homely bower
Till earth grew iron – still thy leaves were green.
The children sought thee in thy summer shade
And made their playhouse rings of stick and stone;
The mavis* sang and felt himself alone

Clare describes the tree with human qualities. It has a language of its own but is betrayed by the ‘cant’ of modernising ‘knaves’. This is a really interesting aspect of the poem, the way Clare deconstructs the word freedom.

The people who were pushing the enclosure of the common land were doing it in the name of progress, throwing off the chains of the landowning class and promising the poor a life of liberty from their slavery.

But Clare can see the trap. Freedom for the new property and land owners meant loss of freedom for the urban poor. Think free market, free trade and free choice – the mantra of the neoliberals. Clare nails it like this:

Bawl freedom loud and then oppress the free;
Thou’st sheltered hypocrites in many a shower,
That when in power would never shelter thee.

This is an angry and deeply moving poem of loss and duplicity. You can’t help feeling sorrow at the demise of the ancient tree.

With axe at root he felled thee to the ground
…
– such was thy ruin, music-making elm

Although the legal fencing in of land had been going on since the 13th century and was widespread in the 16th century, the phenomenon gained pace between 1760 and 1820. Villages and common land were swept up into private ownership and the landless working class provided the labour for the industrial and agricultural revolutions.

Marx in Capital argued that enclosures enabled the transition from feudalism to capitalism by transforming land for subsistence into a profit making resource.

Some say that the better-off European peasantry actively encouraged enclosure as a way of ending the poverty and uncertainty of subsistence farming. But EP Thompson in the 1991 edition of The Making of the English Working Class argues that: “Enclosure (when all the sophistications are allowed for) was a plain enough case of class robbery.” 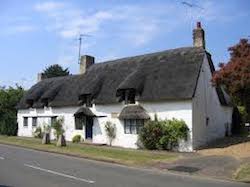 Clare experienced the graft of manual labour both before and after his village was enclosed, and was vocal on behalf of the rural poor. But he was actually a small ‘c’ conservative. The aristocratic Marquess of Exeter granted him an annuity and Earl Fitzwilliam gave him a cottage (left) and a piece of ground, although by 1823 Clare was nearly penniless and never settled in the new family home. This support from the paternalistic landowning class may explain his acceptance of his lot: “with the old dish that was served to my forefathers I am content”.

Although he had skipped church in his youth to spend time in the fields and was critical of parish life, he remained a committed Anglican: “Still I reverence the church and do from my soul as much as anyone curse the hand that’s lifted to undermine its constitution.”

Similarly, he was given freedom to go out into the town and encouraged to write by the enlightened Dr Thomas Pritchard at the Northampton General Lunatic Asylum where he spent the last 23 years of his life.

So we can see that there was much about the establishment that Clare was grateful for. He looked back on his childhood as the son of a poor farm labourer with nostalgia and was furious at the rampant capitalists who were able to buy up the rights to land use or pass laws which would enable them to force enclosure:

In some ways we can understand both Clare’s anger and his conservative perspective. He was harking back to childhood, a time when he felt happy and free, before his situation and mental health went into free fall.

As an adult he knew what it was like to be regarded as a curiosity by London society, and he knew the chill of poverty and the cares of family responsibilities. During his life, reformers and working people began to achieve hard won concessions from the landed gentry and the upwardly mobile rich, but perhaps this did not impinge on Clare in the asylum.

It would be interesting to know what he would think about present day rural life. I wonder what he would have thought of the mass trespass on Kinder Scout, for example, or the long overdue right to roam legislation passed in 2003. Would the growth of the environmental movement have warmed his heart? Would the climate crisis have broken it? There’s no doubt he was ahead of his time on all these issues.

Knowing about Clare’s life and times enhances our understanding of his poetry but in the end it is the work that stands the test of time. If you have not come across these three poems before I would strongly encourage you to read them now.

You can forget wandering lonely as a cloud as far as I’m concerned. It’s Clare who speaks to me.

See also: ‘The Root of the Problem’, Maria Goulding’s review of The Overstory by Richard Powers.

* ‘Mavis’ is a colloquial name for a song thrush.

You can read more of John Clare’s poetry here.