MARIA GOULDING reflects on Ali Smith’s recently completed series of seasonal novels, an interwoven quartet written and published each year since the Brexit referendum. They are, she says, ‘both enjoyable and serious novels for our times’.

Ali Smith is the sort of person I’d love to have as a friend. She’s deadly serious about all the cruel, heartless and sinister things that happen to us in society but she does it all with such an infectious lightness of touch that you never feel she’s lecturing you. 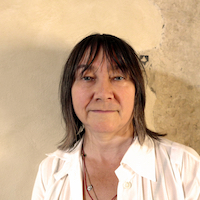 She’s also an experimental writer so if you don’t like a bit of magic and riddling wordplay she’s probably not for you. Except there’s nothing deliberately obscure in her writing, even if it is puzzling at times. You just have to go with it and gradually you get the whole picture.

Sure enough, she weaves in Shakespeare and Dickens, plus artists like Pauline Boty, Barbara Hepworth and Tacita Dean. But it’s not done to exclude or belittle the reader – rather to enhance the rich tapestry which is her typical style.

Apparently Smith (above) has always wanted to write a quartet of novels that follow the seasons and in 2016 she felt ready to do it. It was an ambitious project as she set out to write and publish quickly while events were unfolding.

At the Edinburgh Festival in August 2016 I heard her read an extract from the proof of the first novel, Autumn, which she was about to send to her publishers. I was still reeling from the result of the Brexit referendum vote while others were delighted.

Against this backdrop Smith weaves the story of an unconventional relationship between Elisabeth and Daniel, one which had begun in 1993 when she was only eight and intrigued by the much older man living next door.

There are comic episodes, as in Elisabeth’s frustrating attempts to renew her passport, and more ethereal scenes, as when Daniel dreams he is dead. It is a story of memory and how we experience time – both clock time and subjective time in which short intense periods seem to last forever while long periods collapse into seconds. It is about the way we are buffeted by events around us but how, in the end, these events fade into obscurity.

Smith does not carry all her main characters across all four novels although some of the themes run through. Whereas Daniel collected the vibrant, youthful paintings of Pauline Boty, one of the main characters from Winter loves the ageless sculptures of Barbara Hepworth. 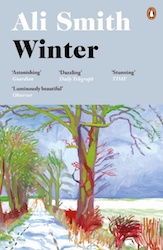 This second novel is the story of two siblings who dislike each other intensely but can still find moments of fondness. Sophia has been successful in the commercial world and is estranged from Iris who left home young to become an activist, joined the anti-nuclear protests at Greenham Common and has been working in Greece to support people arriving on the migrant boats.

The darkness and rituals of this time of year bring these two older women together over the Christmas period, along with a motley collection of characters.

There is Arthur, for example, whom the two women have brought up alternately (imagine that!) and now works for the security company that had patrolled forbidding fences in Autumn. And there’s Lux, a migrant stranger, who works in a packing factory. And there’s the bobbing disembodied head of a child that appears in Sophie’s hallucinations. I’ve got my own explanation for that phenomenon but you’ll have to read the book to make up your own mind.

Again this novel probes time, looking backwards over a long life while using art and literature to hold the narrative and themes together. Smith weaves in The Christmas Carol and Shakespeare’s Cymbeline, the reason Lux came to the UK in the first place.

Just as the mood in the country following the EU referendum became bleaker, so does the mood in Smith’s quartet. The third novel, Spring, addresses the fate of people who have fled their homes because of conflict and climate change.

The art which infuses Spring is Tacita Dean’s monumental chalk picture of a mountain which I saw in the Fruitmarket gallery in Edinburgh a few years ago. It is a terrifying image of an avalanche coming towards you (the climate crisis, perhaps?) and yet is made from that most insubstantial of artists’ materials – blackboard chalk.

Meanwhile, Brittany is a young woman working in an immigration removal centre who claims that it is not a prison but has “a prison design”. There are shocking details of the everyday lives of the detainees but into it all steps a child, Florence, who manages to fool lots of people and whisk Brit off on a journey of enlightenment to the other end of the country. Florence can see through all the injustices in the world with a 12-year-old’s clarity of vision.

Smith transforms this dark story by introducing a fragile note of hope. Florence echoes the lost daughter, Miranda, from Shakespeare’s Pericles. Born at sea and alone in the world, she seems to have enough virtue to keep her safe in the most dangerous situations.

I did wonder if Smith would have to rewrite whole chunks of the last book, Summer, when the coronavirus crisis hit. But she’s managed to include it and deliver a fitting conclusion to the quartet. 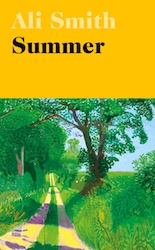 Covid-19 does not take centre stage in Summer but it does provide the context for its tale of two warring siblings affected by the lockdown and the tragedy of lives lost due to the incompetence of an uncaring government. Several characters from the earlier books reappear and lots of connections are made, not least with Brexit, which has divided the family at the centre of the novel.

Sacha, a clever 14-year-old is fired up with outrage at the climate crisis and moved by kindness to write to a Vietnamese inmate in a detention centre. In contrast, her troubled and troubling younger brother, Robert, emerges from extreme truculence and cynicism when he is spellbound by the beautiful Charlotte, the one-time girlfriend and now substitute sister for Art, whom we met in Winter.

These two pairings are echoed by the interwoven story of Daniel from Autumn and his sister Hannah, with whom he lost touch when they escaped from Nazi Germany during WWII. So many war narratives fail to acknowledge connections with present day phenomena but Smith makes these links throughout the novels.

When we read about the internment camp on the Isle of Man where Daniel and his frail father are detained during the early parts of the war, we can’t fail to see the connection with our own society’s treatment of refugees and asylum seekers.

Hannah’s story was for me one of the most poignant in this entire tapestry. Working for the French resistance by helping refugees acquire forged papers, she leaves behind a baby to take on one of her last missions. Daniel, in his 104th year, moves in and out of fond memories of his sister, and is comforted by the presence of Robert, who he mistakes for her. This is Smith gender bending again. And, yes, the abandoned baby turns out to become the grandmother of Robert and Sacha.

This last novel opens with the siblings’ mother, Grace, trying to remember a line from a stage adaptation she had acted in during her youth while scolding Sacha for not attributing a quote she is using for a school essay. Apart from using the opportunity to insert apt quotations, this is Smith commenting on the need for veracity in our fake news era.

The quote Grace is struggling to remember turns out to be from David Copperfield: “Whether I shall turn out to be the hero of my own life, or whether that station will be held by anybody else, these pages must show.”

Sacha’s is from Hannah Arendt: “Forgiveness is the only way to reverse the irreversible flow of history.”

Whereas hope sang like a small bird in Spring, this final novel is full of people trying in different ways to be the heroes of their own lives in an imperfect world. And its full of small acts of forgiveness – between Sacha and Robert, and between Charlotte and Art – which perhaps provide a blueprint for a better world.

If there are metaphors for the way that Ali Smith writes, they would have to be from the world of art and craft: she embroiders, she weaves, she paints, she makes collage – and all with a dancing delicacy that belies her skill.

She is in love with language and meaning, and the way words can be used and misused. There is no heavy-handed tub-thumping here, yet these are both enjoyable and serious novels for our times.

You can read Maria Goulding’s review of The Overstory, by Richard Powers, here.

Her reflections on the wonder and relevance of John Clare’s poetry is here.