Tenant activists in Stirling have been inspiring fellow students across Scotland to fight back against rip-off landlords and university rent rises. CIAN IRELAND and DANIEL DEERY report on 18 months of hard campaigning.

On 4 February 2019, around 40 students at Stirling University met to form a tenants’ union. Agitation had been increasing in recent months following more than a decade of unrelenting rent rises in university accommodation.

There had been many previous attempts to form a union, and some success in slowing increases and securing benefits, but now students were finally fed up with being ripped off and resolved to tackle the issues head on. So began the Stirling Students Tenants’ Union (SSTU).

It wasn’t just rents the students were angry about, however. The meeting also discussed the condition of student housing, one describing tap water in their accommodation as like “a pint of Guinness”, while others raised concerns about lack of security. The housing needs of students in private non-university accommodation were also raised.

A constitution was ratified at a marathon meeting the following month and an elected committee (pictured below) began work straight away. Eighteen months later, it’s time to analyse the union’s successes and weaknesses, and ask what lessons have been learned to help shape the future of the student tenant union movement across the country.

One of the main successes of the SSTU has been its ability to draw in new activists. Our membership has grown far beyond traditional university political circles. In fact, the current executive committee includes many students who were not present at the foundational meetings. This process is crucial for any union, but especially necessary for a body that needs to organise an entirely new group of people every four years. 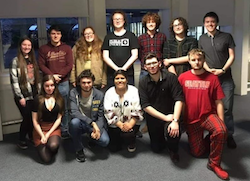 The strong and growing activist membership has enabled us to organise numerous campaigns, to stand up to a university management driven by the demands of a commercialised sector, while also providing direct aid to students in crisis.

Union members have been there to assist students in many dire situations, such as showing up with less than an hour’s notice to represent tenants facing illegal eviction, and securing them shelter for the night in a member’s flat.

We are particularly proud of our ‘Coronavirus Volunteer Moving Campaign’, which involved several teams of volunteers moving students’ personal belongings into safe storage after they had travelled home in a hurry at the start of the pandemic. Many students couldn’t afford the university-recommended moving service, so we met their needs for free. We also negotiated for the university to pay up to 20 per cent of the costs for those who had paid moving fees upfront.

We also have an ongoing ‘Coronafee’ campaign, advocating for non-payment of a £400 fee that was levied on students who took the advice of the Vice Chancellor, Gerry McCormac, and moved back home early in the pandemic. The university recently contacted those who have not paid, but the union has found that some students may had been overcharged hundreds of pounds, something we plan to challenge vigorously.

These campaigns have helped us build a group of active tenants who are now experienced organisers. It has, at times, taken a lot of energy and has not yet led to a radical change in relations between students and landlords in Stirling.

But we have materially improved their conditions and supported them during numerous crises, while building their experience and confidence as organisers. Indeed, many have been exposed to the true nature of ‘landlordism’ for the first time, while becoming aware of the need for collective self-ownership of housing.

These steps are crucial if we’re going to organise bolder actions and campaigns in the future, ones that can begin to challenge the student tenant to landlord relationship. This, we’d argue, is the biggest success of the union so far.

There have been some areas where we’ve been less successful, however, not least our lack of presence among non-European and non-North American students living in university accommodation who face additional problems, such as regular inspections followed by threats and abuse if the university don’t think their flats are being kept up to a certain standard.

These actions are blatantly discriminatory and racist. The students who face these inspections are called ‘INTO’ students, effectively students who do an extra year because English isn’t their primary language. Most of them are non-white, and no other group of students faces this degree of policing around how well they keep their flats.

The tenants’ union’s failure so far to properly organise against their treatment is a weakness we need to own up to and address.

Another has been our overly bureaucratic original constitution. Thankfully, this has since been amended, showing our commitment to self-development and improvement.

Indeed, the future of the Stirling University Tenants’ Union is bright, not least with the election of Elena Semple as general secretary, and many other fantastic organisers on the new executive committee.

On a national level too, the student tenants’ movement is growing, with Aberdeen at the forefront over the past year and coronavirus quickening the pace of developments in many universities.

Indeed, student housing issues in general have been brought to national attention due to Covid-19, which has exaggerated all the usual problems caused by neglectful landlords, whether private or university.

The ‘Student Tenants Organise!’ campaign, led by Living Rent, recently brought organisers together from Glasgow, Aberdeen, Dundee, Stirling and Edinburgh to devise a strategy – loosely based on the Stirling model – for organising on a city-wide basis and across different institutions. A Glasgow student tenants’ union will be founded by the radical Strathclyde Students Union, and their vice president of communities, Benn Rapson, on 27 October.

The potential is there now for these tenants’ unions to make demands on a national level, something that will be especially important if we’re going to change legislation, which currently affords less protection to students in halls compared to traditional tenancies.

Once they’ve graduated, many of these new student organisers will take up the fight against landlordism in the wider market. If we organise, campaign to improve our conditions and put forward plans for democratic housing, the future could be much brighter – for students and tenants everywhere.

Cian Ireland was the first general secretary of Stirling Student Tenants’ Union and is treasurer of Scottish Labour Students.