Reading Barbara Kingsolver’s Unsheltered in the run-up to the US election was a sobering and resonant experience, says MARIA GOULDING. It’s a story centred on a dilapidated old house, a powerful image for American society struggling to overcome its legacy of lies, injustice and inequality.

BARBARA KINGSOLVER wrote this novel in the midst of Trump’s four-year term as US president, and I read it in the run-up to the 2020 election. I am writing this review bleary eyed and joyful the day after the Biden/Harris victory. 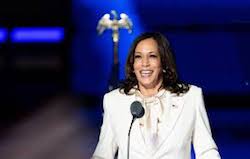 In her first speech after the result was finally declared, Kamala Harris told the assembled crowd: “You have chosen hope, unity, decency, science and … truth.”

Those words infuse this novel, but not in the joyful tone of the Harris speech. Kingsolver’s tone is pessimistic and despairing, although a small note of hope slowly builds as the narrative unfolds.

The novel’s central metaphor is of a crumbling house, falling down around the ears of Willa Knox and her family. It represents the state of America with its merciless treatment of the sick, the poor and the disenfranchised. Interwoven with this story is that of a real female biologist, Mary Treat, who corresponded with Charles Darwin, and an invented character, Thatcher Greenwood, a teacher who found the courage to speak truth to power.

This is a rich, heavily peopled novel. Willa, an out of work journalist, finds herself holding her financier son’s baby after the suicide of his ambitious banker wife. Her daughter Tig has returned from living in Cuba and finds more in common with the Latino household next door than with her own more conventional family. Willa’s carefree academic husband, Iano, has been forced to move north and take a one-year teaching contract after the university where he taught in Virginia went bankrupt.

The couple have suddenly and unexpectedly fallen on very hard times in the unforgiving and hard-to-navigate society which is the United States at this point in history. Iano’s sick father, Nick, is both a torment and a heavy responsibility – he takes delight in shouting Trumpisms and having his radio on at full blast. Some of the most terrifying scenes in the book depict Willa’s desperate struggles through the labyrinth of the US healthcare system as she tries to get support for Nick’s care.

Alongside the contemporary story, we have Thatcher Greenwood, who briefly lived in Willa’s house in the mid-19th century. Next door is the brilliant Mary Treat, a painstaking and assiduous amateur biologist who defies convention and is passionate about the new science of evolution. Thatcher, trapped in an unhappy marriage with an acquisitive and shallow wife, finds solace in his scientific conversations with Mary. 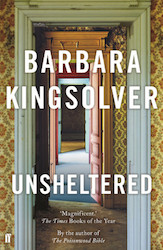 This is no ordinary community. Vinelands, the New Jersey town where the novel is set, was created as a utopian temperance Christian community by the land developer, Charles Landis, after the Civil War. It is anything but utopian for anyone with a mind of their own, however. Landis rules with a rod of iron, dissent is outlawed and anything that hints at undermining fundamentalist beliefs about creation is drummed out. The contemporary parallels are hard to miss.

There is one point in the novel where I thought Kingsolver had gone too far, when Landis shoots the rival newspaper editor, Carruth, and abandons him to die at home slowly without any medical attention. The brain-washed community condone Landis and he is acquitted on a plea of temporary insanity.

But I was sobered to find out that this did actually happen. You couldn’t make it up, as they say, and when I saw gun-toting Trump supporters at protest rallies in the days following the election I shivered at this reminder of the underlying menace in meglomaniac societies.

By the time Willa and her family move to Vinelands the history of the community can be traced only in its street names – Plum, Peach, Apple, Almond. When it was set up, the first inhabitants had to clear and farm the heavily wooded land, and build a house within a year of purchase. Although attractive, the houses were built without foundations and are now falling down. The town has become a backwater and the house is a nightmare that Willa and Iano have inherited.

The narrative in Unsheltered runs along at a breathless pace and halfway through I was ready to abandon the book. I am very glad I persevered because what Kingsolver does so well is socially engaged fiction.

There is a difficult balance to strike here. Nuance and ambiguity can be sacrificed for message but Kingsolver makes up for some of the more obvious elements of the book by marrying the personal and political quite brilliantly. Nowhere is this better achieved than in the conversation between Tig and her mother in a cemetery they sneak into clandestinely to bury Nick’s ashes.

Tig is the daughter who goes her own way, drops out of college and exasperates her security seeking parents, unlike her brother Zeke who has always done everything by the book. But it is she, and her boyfriend Jorge who have the practical skills to look after the baby, change Nick’s incontinence pads, make delicious meals out of leftovers in the fridge and recycle, repair and reuse everything they can lay their hands on. Willa is a loving and responsible mother holding everything together as best she can but she learns a great deal from her wise daughter.

This is not great literature. For me there was little let-up in pace, many of the characters were undeveloped and the dialogue at times is unconvincing. But it did something else for me. I could identify with Willa’s day-to-day frustrations, and with Tig’s idealism and clear sightedness. And I could recognise the tensions and polarisations even within a single family.

Above all, the resonant struggles for truth in past generations and Kingsolver’s commentary on the state of Western capitalist society and the USA, in particular, have stayed with me throughout this turbulent autumn. This was my first Kingsolver novel but I am ready to read more.

Unsheltered by Barbara Kingsolver was published by Faber & Faber in 2018 and is available here for £8.99.