As the end of year Brexit deadline arrives, the left-wing group Another Europe is Possible is leading calls for Labour to withhold support for the Tories’ woeful trade agreement.

Jeremy Corbyn’s inability to deal effectively with the admittedly complex Brexit conundrum was a tragedy that unfolded in painful slow motion until the election defeat of 2019. Yet Keir Starmer’s announcement that he will whip Labour MPs to support the EU trade deal is getting close to farce. 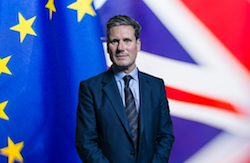 Starmer’s desire is to signal to lost ‘red wall’ voters that Labour has moved on from Brexit and to acknowledge that even this poor deal is better than no deal. However, not only is this unlikely to cut very deep with voters who rightly see Starmer as a leading anti-Brexit politician, but it undermines his own efforts to turn Labour back into a credible opposition.

During the long road from the 2016 referendum many leading Labour MPs, including Starmer, have argued that any departure should protect economic interests with Europe and uphold and defend workers’ rights and environmental protection. The hard line taken by Boris Johnson’s government to achieve regulatory divergence from the EU was a clear enough signal if we needed it, that their vision for the future is for deregulation and undermining workers’ and environmental protection.

Although there was some compromise by Johnson’s team, allowing the new UK-EU Partnership Council to consider “any issue relating to the implementation, application and interpretation” of the Trade and Co-operation Agreement, the vision of a deregulated post-Brexit economy remains the driving motivation for many Tories.

If one adds the farce of parliament ‘taking back control’ by rubber stamping highly complex legislation in a single sitting, then the case for Labour’s backing becomes even thinner. The party’s parliamentary support for the deal will hang over it for many years and do nothing to reassure progressive younger members, many of whom have waning enthusiasm for the party.

It’s not surprising, then, that a group of MPs, trade unionists and activists from across the political spectrum are calling on Labour to withhold support for the deal – either by abstaining or voting against.

Led by Another Europe is Possible, signatories to the statement include John McDonnell, Clive Lewis, Ben Bradshaw and Momentum supporters including Laura Parker and Anna Oppenheim. Denouncing the deal as “designed to open the door to rampant deregulation” the statement argues that it is an “act of vandalism against our livelihoods, our rights and our horizons”.

It concludes saying: “The vital task now is opposition: proper parliamentary scrutiny of this and all future trade deals, and the setting out of an alternative future in which we not only regain the rights and jobs we have lost, but become a better and more equal society. That task gets harder if opposition parties fall into the trap of rallying around this rotten deal.”

Read the statement by Another Europe is Possible here.

You can sign up to support the statement here.