Keir Starmer’s Labour leadership must amount to more than just competence and Union Jacks, says DAVID CONNOLLY. It’s time for Starmerism to assume the social and economic shape promised by his own campaign pledges.

The use of the Union Jack to display patriotic commitment by the Labour Party is nothing new. In 1924 a group of young Scottish ILPers made their way to the Labour conference after the election of the first Ramsay MacDonald government expecting to see a red flag flying above the venue. But as they got closer their hearts sank – there was no red flag just a Union Jack fluttering in the breeze. 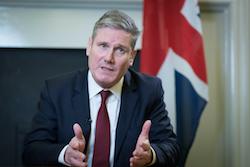 Their disappointment was understandable, for them this was the flag of imperial oppression, racism and exploitation. It represented the ideas and policies they were fighting against.

Using the flag as a backdrop to prime ministerial announcements and speeches was something David Cameron employed on an occasional basis, but became routine with Theresa May. Boris Johnson, as if to emphasise his commitment to Brexit, increased the number of flags from one to two.

To the disappointment of many, both Keir Starmer and Angela Rayner have felt obliged to copy the Conservatives and often both now speak with a Union Jack behind them.

Not all national flags symbolise oppression, some represent national liberation. But as David Olusoga noted in his January 2020 article, ‘Telling our nation’s true story’, in Prospect magazine:

“When the British flag was lowered across the quarter of the world that had once been pink, an empire of territory and domination was replaced by an empire of delusions; a fantasy realm upon which the truth never rises. When the inglorious chapters of the imperial story – slavery, the Indian famines, the genocide in Tasmania – are forced into the national conversation they are relativised away; after all, was British rule not more benign than that of the Belgians in the Congo, was it not less brutal than that imposed on Namibia by the Germans? The closing down of the imperial debate, and its absence in schools, means that few in Britain recognise how the imperial project enriched the nation or how often colonial rule was underwritten by extraordinary violence.”

Among a few exceptions – notably Keir Hardie, George Lansbury and Jeremy Corbyn – Labour leaders have tended not to express critical views of the British Empire, so perhaps it’s not surprising to find Starmer using the national flag to boost his own credentials among Brexit-supporting former Labour voters in the so-called ‘red wall’ seats the Party lost so badly at the last general election.

According to Deborah Mattinson’s research, these voters view Boris Johnson as ‘positive and patriotic’ but see Labour as a party of the south, full of idealistic middle-class students supporting welfare ‘scroungers’ and free movement. While Starmer himself has made a favourable impression on such voters, they remain deeply sceptical of the party itself.

When Starmer says to them, without qualification, “We love this country as much as you do”, it appears he has made a strategic decision to put a particular uncritical version of patriotism at the centre of his pitch, one that is often hostile to those regarded as ‘not belonging’. He may wish to pre-empt the kind of attacks persistently made on Michael Foot, Ed Miliband and especially Corbyn for their perceived lack of conventional patriotism, but this will come at a cost to his ability to shape a wider agenda.

Although he eventually described the Black Lives Matter protests as “a defining moment”, his insistence that his insistence that the Colston statue should only have been removed by legal means when campaigners in Bristol had been trying to do so for several years, does not augur well. Nor does his decision to abstain on the Covert Human Intelligence Services Bill, which extends law breaking by the state.

How far Starmer is willing to go down the patriotic road remains to be seen but if his intention is to march one step behind the rhetoric of the present government then Labour will soon find itself in difficulties with other sections of the electorate.

What we do know is that he is strongly resisting attempts to spell out a social and economic programme until we’re much closer to the next general election which, barring the unexpected, is still a long way off. This is partly an attempt to offset the impression created in December 2019 that Labour had more policy offers than it knew what to do with, its core message getting lost in a myriad of seemingly uncoordinated announcements.

It’s also the result of uncertainty generated by the pandemic and an understandable keenness among the Labour leadership to project its commitment to ‘thought-through’ competence, in contrast to the numerous serious errors made by the government in relation to Covid 19.

But the shape and depth of Starmerism is hard to make out. There is no archive of speeches and interviews to draw upon and we know from previous experience that Labour will always struggle to get a hearing if the terms of the debate are constantly set by its opponents.

As the broad-based Labour Together report, Election Review 2019, argued, a bold offer is needed especially for those working in the underpaid and undervalued service sector, not least because it has the potential to transcend the socially liberal / socially conservative divide in the wider population, as it did to a significant extent in 2017.

Beyond the pandemic Labour needs to offer an explanation of why the country has become so unequal and what it will do to address the problem. While this can be done in a staged manner, it cannot be left too late. Centrist realism, with its excess of caution and lack of vision, is unlikely to be enough. In any case, by the middle of the decade the pressure on government to start paying back its huge and necessary pandemic borrowing will be intense.

Past experience suggests that such a situation will challenge Labour’s social democratic commitment to its limits. The only way to restore public services in a fair and equitable manner at both local and national level will be to institute a substantial programme of wealth redistribution requiring daring fiscal innovation and political nerves of steel.

There is a need to lay the groundwork for more social democratic and socially liberal policies now in order to get a hearing for them in years to come. We’ve seen Labour sacrifice its values in pursuit of establishment ‘respectability’ and caution so many times in the past, and know where that path leads. Finding the terms to tug the centre of political conversation to the left while connecting with people’s everyday concerns ought to be a central part of any Labour leader’s task.

In the meantime, our focus has to be on the 10 pledges Starmer made in his leadership campaign, “based on the moral case for socialism”, as he put it – economic justice; social justice; climate justice; peace and human rights; common ownership; migrants’ rights; workers’ rights and trade unions; radical devolution of power, wealth and opportunity; equality; and effective opposition to the Tories.

As these were largely inherited from the Corbyn era some members have questioned the sincerity of his commitment. But this attitude misses the crucial political point – Starmer made these pledges and they have radical potential. This is not something the leader can ignore or explain away as someone else’s promises. This is his construction, something he deemed necessary and the basis upon which a lot of people voted for him as leader.

The recently formed Northern England Labour Left has produced model resolutions on three of them – climate justice, workers’ rights and trade unions, and equality – for use in Labour branches and constituencies. The intention is to hold the party leadership to account by urging Starmer to follow the very pledges he made in order to become leader early in 2020.

They should be an important reference point for the left. If we are persistent, a significant part of the struggle to come will be about their meaning and interpretation; how the party translates them into policy. Rather than simply calling Starmer a ‘traitor’ or a ‘sell-out’, the left should see his pledges as an opportunity. Surely, the Labour Party has to be about more than just competence and Union Jacks. After all, Starmer himself has said so.