Anyone from Northumberland or County Durham involved in the 1984 miners’ strike will know the name of Anne Suddick, who died this month aged 72. Anne was a founding member of Women Against Pit Closures, set up the Durham Miners’ Support Group, and coordinated the Northumberland and Durham Justice for Mineworkers Campaign.

MARY STRATFORD remembers a tireless campaigner and committed feminist who touched the lives of many with her personal warmth and powerful leadership.

Born in 1948 in Langley Park, Anne Suddick came from a mining family and remained connected to mining throughout her working life, chiefly as personal assistant to the general secretary of the Durham Colliery Mechanics’ Association. 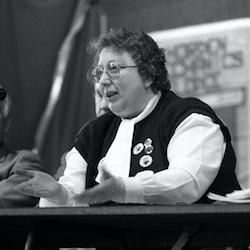 Anne was a remarkable woman in so many ways – a powerhouse of an organiser, a leader, an artist, and later an academic. She was also a committed feminist, but it is for her many campaigning roles during and following the strike that we will remember her most.

Anne was never one to seek the limelight but when the strike began she quickly realised the implications for miners’ families, especially those who, like my own, were living in former mining villages some distance from the colliery and the union lodge.

Using her union knowledge, and supported by then mechanics’ general secretary, Billy Etherington, Anne set out to ensure no family was left isolated and support was available no matter where they lived. It was a massive task, but Anne’s organisational skills were immense and she harnessed union activists and their wives (me being one) to track down every family and make them aware of the support groups, encouraging each of them to get involved.

In the larger north east mining communities, such as Easington and Seaham on the Durham coast, such support was already happening. But there was much less available in the numerous former mining communities scattered across the rest of the county.

The speed at which Anne arranged meetings and set up groups in these smaller villages was impressive. But she went further, for she recognised they could not operate in isolation and needed to come together for mutual support, solidarity and fundraising. So in May 1984 she held a meeting at Durham Miners’ Hall on Redhills, home of the Durham Miners’ Association, to launch the countywide Durham Miners’ Support Group. Not surprisingly, she was chosen as its coordinator.

From the outset Anne drew us together in a spirit of co-operation and with a can-do attitude, making sure everyone felt included and everyone’s voice was heard. The group had few formal structures to avoid unnecessary bureaucracy, while everyone was welcome to join – female or male, young or old, those with a mining background and those without.

Quite how she chaired those initially chaotic, loud and ‘Bolshie’ meetings, I will never know. But somehow she did and through her leadership we became a well-oiled machine raising enormous amounts of money and distributing it fairly.

What blossomed in that group was an amazing thing, and it resonates with me still. But the key to its success was the feeling of solidarity engendered in those wonderful and inspiring meetings. That’s what kept us all going through the difficult times and it was primarily due to Anne.

The list of what she achieved that year is endless but special mention must go to the toy and turkey appeal. Her idea (and it was hers alone) was to provide every striker’s child with a present and every striking family with a turkey, so they at least had some semblance of a Christmas celebration in 1984. 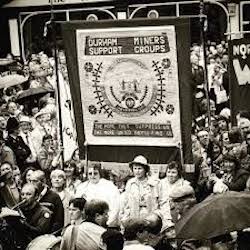 I’m sure I wasn’t the only one who thought she had taken leave of her senses. The task was mammoth. But with her usual commitment, skill and enthusiasm, the goal was achieved. Anne even managed to get the Bishop of Durham to launch the appeal, garnering widespread publicity, while she was relentless in pursing trade unions and other organisations, nationally and internationally, for support.

As if raising the funds wasn’t enough, Anne then organised a massive logistical operation to transport and distribute it all to the families’ homes. I have a vivid memory of her in Murton Welfare Hall directing operations, sending us all on our way to deliver the goods, looking exhausted, stressed and ecstatic at the same time.

It was early in the strike when Anne realised the importance of the role of women and she worked closely with others to form Women Against Pit Closures, bringing together women from across the country to share ideas and campaign. She stayed active in the organisation for many years.

In Anne’s own words, written many years later, “What began as a movement to support the men became a movement in its own right, operating on its own terms and speaking in its own voice.” One among the countless others she inspired was the singer Mal Finch, who apparently wrote the women’s strike anthem, ‘We are women, we are strong’, in Anne’s honour.

Anne’s commitment to the women of the coalfield never faltered, and was perhaps best illustrated in her approach to the arts. She was an incredibly creative person and an accomplished poet (see one of her poems, below), and she encouraged women in support groups to write poetry and create drama as a way of escaping stress and disappointment. This was especially important in the strike’s later stages and afterwards when an anthology of poetry was published and a play performed.

After the strike Anne turned her efforts to supporting sacked and victimised miners as part of the Justice for Mineworkers Campaign for she was determined their sacrifice should not be forgotten. Later, she studied sociology at university and remained actively involved in the feminist movement and community causes for many years.

The workload she took on during the strike, and for years afterwards, was enormous and hugely stressful. In the end it took its toll. I have no doubt that the physical and mental health problems she encountered in later life had their roots in that incredible and intense period.

By the time of her death Anne had become something of a recluse and I had lost touch with her, despite some belated efforts to re-establish contact.

Those whose lives she touched, however, have never forgotten her. When news of her death reached them, numerous friends and activists came together to share memories and celebrate her accomplishments while trying to raise funds for her funeral.

A JustGiving page has been set up to assist with the effort and any donations would be very welcome. She deserves a fitting send-off. Rest in peace, Anne.

The Black
A poem by Anne Suddick

I heard it in the cold night, in the darkness deep and wide,
I heard the cries of anguish, and I must admit I cried.
For the children and the people, when the living had to die,
When the mountain moved its muscle – and the Black began to slide.

When you’re working in the bowls, do you ever look away
From the early, edgy, darkness of the never ending day?
Did you hear the crack of timber; did you feel the cry of pain?
Did you sense the night engulf you – when the Black began to sway?

Do you ever voice the question, ask yourself just why
You’re fighting to retain your jobs when you rarely see the sky?
Do you dwell upon the future, do your prospects pass you by
As you count the kids on corners – when the Black begins to die?

Oh you not of mining listen, the collier’s lot is dust
Of artificial airways, machines, and noise and trust.
It’s a special kind of human, works beneath the dark earth crust,
Who stakes his life and freedom – when the Black begins to crush.

A JustGiving page has been set up with support from Education 4 Action, The Durham Miners’ Association and the Women’s Banner Group to raise funds for Anne Suddick’s funeral and to place a memorial bench in the grounds of Redhills Miners’ Hall.

Click here to go to the JustGiving page. Any excess funds will be donated to the Redhills Appeal.