PAUL SALVESON reviews The Dignity of Labour by Labour MP Jon Cruddas, a fascinating engagement with the changing nature of employment and a thoughtful search for a popular, progressive politics that can provide a clear alternative to the Tories.

Jon Cruddas is one of the more thoughtful members of parliament. He represents Dagenham and Rainham constituency in east London and has the battle scars from confronting, and defeating, the BNP. 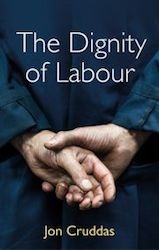 His book The Dignity of Labour is a fascinating engagement with the nature of work in the 21st century and how Labour should respond to the huge changes that have taken place since the days when the Ford plant in Dagenham employed thousands of workers. Dagenham summed up the modern Fordist economy and the politics that flowed from it – huge concentrations of highly organised workers whose politics usually would be Labour.

That world has gone but it’s too easy, as Cruddas argues, to say goodbye to the working class, or even work itself, and put all your political eggs in the basket of the new networked young professionals and a form of technological determinism. As events of the last few months have shown, the working class is still with us and Labour has paid the price of assuming ‘they’ll always vote for us’. That hasn’t been the case for quite a while but consciousness usually lags far behind reality.

Cruddas doesn’t offer simple remedies and parts of his book are an interesting theoretical encounter with Marxism and Catholic social teaching, which Maurice Glasman’s Blue Labour tendency has done much to promote. A central message is that work must be not only well paid but meaningful; something that the worker can take pride in.

A contentious part of the book is his rejection of Universal Basic Income (UBI). His argument is that UBI would further distance people from work and in effect de-motivate people from creative activity.

Maybe I’m over-simplifying his argument but I can see where he is coming from. Would it de-motivate people? In some communities there are families who have experienced generational unemployment and it is little wonder they are de-motivated.

Cruddas describes this “interpersonal brutality” from his own experience of communities in Dagenham. Having the safety net of UBI could actually be liberating for some people who want to build their own businesses or develop creative work that doesn’t involve an employer/employee relationship. Perhaps it’s worth a try – the Labour-controlled Welsh government recently announced they were going to pilot a scheme, so let’s see how it develops.

Cruddas could perhaps have said more about links between work and community. It’s implicit in the book, which describes how, in the past, tens of thousands of people worked locally in the car factory or did jobs that depended on Ford.

In my own town, the cotton industry provided tens of thousands of jobs and most people walked to work. The communities were built around the mill and people had a very real dignity expressed through a common work-based culture – although this isn’t to glamorise the long hours they endured in unhealthy conditions and the ill-treatment of children.

Re-establishing local jobs, and seeing this as important, is a challenge for Labour. The post-Covid recovery offers an opportunity, with people more reluctant to make long-distance soul-less commutes, which are also huge generators of carbon emissions.

For Cruddas, the creation of meaningful work is central to political renewal. A real strength of this book is the author’s direct experience of practical, radical politics in his Dagenham constituency where, he says, “political renewal … is being constructed on the community’s historic foundations of work and the desire for human dignity. Through council-led regeneration, primarily in reclaiming older automotive, chemical and energy sites, massive housing and infrastructure rebuild is underway, creating tens of thousands of decent local jobs.”

Experience in Dagenham suggests that Labour can retain the support of traditional working class voters. He makes the point that it was one of the few leave-supporting areas where Labour defeated the Brexit Party in the 2019 European elections. Some of that success was down to “organisational reconnection” and showing people that Labour had something to offer.

However, there needs to be a vision behind this and Cruddas laments that “the party’s ideological underpinning has collapsed in recent years”. This was starkly revealed in the 2021 elections where many party activists, as well as voters, said they just didn’t see what the party stood for.

Yet there is a near-forgotten ideological tradition within Labour that still has something to offer, quite different from the top-down statism and economism that remains dominant. Cruddas delves into the history of English socialism and applauds the ethical socialism of the early ILP, continued through the work of EP Thompson, RH Tawney and Raymond Williams.

The distinction between their human-centred politics and the technocratic and economic emphasis of Fabian socialism is identified as the key historical divide in British socialism, which hangs over us still. Within the latter approach, the idea that work should have dignity is meaningless and community is degraded to social media networks. But if we want to build a popular, progressive politics that can provide a clear alternative to the Tories, work and its community link is fundamental.

The Dignity of Labour by Jon Cruddas is published by Polity Press and available in paperback for £14.99.

Paul Salveson is is a visiting professor at the universities of Bolton and Huddersfield and author of Socialism with a Northern Accent: Radical traditions for modern times.

His new book Region: Class: Community: Socialism with a Northern Accent, will be published by Lancashire Loominary later this year.

His exploration of the influence of US poet Walt Whitman on northern socialism will also be out in 2021.