KATH CONNOLLY finds the latest book on the mould-breaking ILPer and Labour MP an unlikely and infuriating mix of fact and fiction. 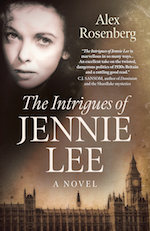 I remember Jennie Lee as a fiery Scots speaker at Labour Party conference in the 1960s, the wife of Nye Bevan and architect of the Open University. So I picked up Alex Rosenberg’s book, The Intrigues of Jennie Lee, with a great deal of interest.

I have also read Patricia Hollis’ wonderful biography, a shorter piece on her life by Michael Foot and both of Lee’s autobiographies.

Rosenberg’s book is different. It’s a mixture of historical fact and fiction set in the turbulent politics of the interwar years. The characters – Jennie herself, Ramsay MacDonald, Sir Oswald Mosely, Nye Bevan, Frank Wise, Sir Charles Trevelyan and Elizabeth Bowes-Lyons (the future Queen Mother) – are real enough, as are the period’s major political and economic arguments around the gold standard and plans to reduce public expenditure.

With a plot that would gladden the hearts of all avid watchers of The Crown, the book features ‘Jennie’ as the central character, a go-between linking Mosely with the royal family whose secret aim is to replace MacDonald as Labour leader and prime minister with Mosely, and so change the course of world history.

It is an unlikely tale, to say the least, and one I found hard to take seriously.

The real Jennie Lee was a daughter of the Fife coalfield who became Labour MP for North Lanark when only 24, a remarkable achievement for a young woman in what was overwhelmingly a man’s world in the 1920s. She was very much a child of the ILP, greatly influenced by her father and grandfather, who included her from an early age in their political discussions around the fireside.

Her loyalty to her class, to ‘red Clydesider’ Jimmy Maxton and to her ILP comrades makes Rosenberg’s invented narrative challenging to the point of incredulity.

How could this fervent socialist so naïvely have been caught up in such an upper-class project? Could this miner’s daughter really have had such a long-standing friendship with Elisabeth Bowes-Lyons, later to be the Duchess of York?

I also found myself distracted by some of the fictional plot devices and simple factual errors. I actually shouted in disbelief when Jennie’s mother, Euphemia Lee, presented herself naked at MacDonald’s hotel door, Jennie being the eugenics inspired child of their encounter.

Elsewhere, Rosenberg places MacDonald’s Seaham constituency in Scotland, rather than the north-east, and has Ashton-under-Lyne in the midlands, not the north west, while scabs are referred to as ‘backlegs’ (a typographical error, no doubt).

The character development is also rather superficial, while Jennie’s frequent sexual encounters left this reader lacking empathy or understanding. Some real conversations are picked out from Lee’s biographies and weaved into the story, but this only makes the book feel even more like a soap opera where plot is everything and characters are shaped to fit.

As someone interested in history and politics, I can’t fathom what we gain from this strange mix of fact and fiction. I imagine many readers will be drawn to the title out of interest in the personalities and politics of the period. I only hope they don’t all find themselves confused and misled by the ‘faction’.

The Intrigues of Jennie Lee, by Alex Rosenberg, is published by Top Hat Books and available here for £12.99.