With auto-exclusions and proscribed organisations, Labour seems to have entered another period of acute internal tension. But the party needs its broad church and membership-based democracy more than ever, says DAVID CONNOLLY.

From the moment of its foundation there has always been a battle for the soul of the Labour Party. After it lost Keir Hardie’s seat in West Ham South in 1895 the ILP pushed to create the politically broad-based Labour Representation Committee, which included Lib-Lab MPs as well as committed socialists. 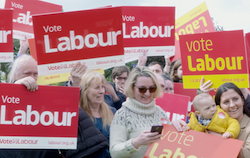 This was the start of the messy compromise that is Labour’s ‘broad church’, which, when it breaks down for any reason, often leads to a prolonged crisis in the party. There is no doubt that we are now living through an especially acute and extended period of internal tension.

Left-wing activists have been on a political rollercoaster for several years: from the 2015 revolt against the legacy of new Labour, to the 2016 parliamentary coup that failed to remove Jeremy Corbyn from the leadership, to the raised hopes of the 2017 general election and the disappointment of 2019.

Now we are faced with Tony Blair and Peter Mandelson calling for the “total deconstruction” and “total reconstruction” of the Labour Party, presumably in a delusional attempt to recreate the heyday of new Labour in the 1990s, and Keir Starmer, a leader who seems willing to echo their rhetoric. “We have to turn the Labour Party inside out” was his recent somewhat vague but macho battle cry.

Members are being told they are guilty of ‘auto-exclusion’ from the party for social media posts that could not be considered by any rational person to indicate support for a political organisation other than Labour.

In one case, a member had shared an SNP post attacking Boris Johnson for a visit to Scotland during lockdown. Another has been expelled for attending a conference held by one of the recently proscribed organisations, even though the event took place several weeks before proscription and the person concerned is not a member of the organisation. Attending a demonstration in support of those expelled can also lead to a loss of party membership.

Understandably, some members have begun to protest, including Harrow councillor Pam Fitzpatrick who appears to have been auto-excluded for giving an interview to Socialist Appeal in May 2020.

Constitutional or not, this does not feel like natural justice to me, it feels like retrospective guilt by association with the accused being asked to prove a negative, that they are not a supporter of the named organisation. It looks like a vindictive attempt to intimidate and demoralise, and part of a concerted push to get left wingers to leave the party of their own accord.

These recent ruptures follow Starmer’s over-the-top suspension of Corbyn from the PLP last year and the general secretary’s high-handed ban on CLP chairs and secretaries holding meetings to discuss the Equalities and Human Rights Commission report into anti-semitism, then re-instating some without any apparent explanation. Meanwhile, the Forde Report still hasn’t seen the light of day.

Some wilder voices on the right of the party are now calling for the banning of Jewish Voice for Labour and Momentum, and who knows what follows after that. Sad to say, my experience shows mutual trust at local party level to be at an all-time low.

According to The Observer (22 August), Starmer is planning to abandon some of the ‘ten pledges’ he made during his leadership campaign. We shall see what he has to say in due course but any significant backtracking will stand in contrast to Joe Biden who has sought a constructive reconciliation with the left of the Democratic Party in the United States.

I am not one of those who thinks political leaders should never have scope for flexibility in strategy or tactics. And, unlike some, I do not believe the recently proscribed organisations are beyond criticism, but what is happening in the party now does not bode well.

It is also counter-productive. As Steve Richards suggested in his podcast of 4 July, contrary to media belief, political leaders (both Conservative and Labour) who ‘take on’ their parties rarely win the subsequent general election.

In the present circumstances, the ILP can only reiterate its long-held view that, “any attempt to progress radical change will have to go through a social democratic agency. This view isn’t dependent on who is party leader at any given time but is based on our assessment of how radical change can be promoted in a British political context.”

Similarly, we think our argument for the party to be “an active, participatory, membership-based democracy that welcomes the co-existence of different viewpoints and upholds the principles of pluralism, mutual respect and comradeship” is more relevant now than ever. Indeed, Starmer appeared to recognise this during his leadership campaign for his tenth pledge spoke of the need to “unite our party, promote pluralism and improve our culture”.

All of this is necessary to make Labour’s ‘broad church’ work in a first past the post system. Unless and until that is replaced by some kind of proportional representation (which is not going to happen anytime soon), for socialists there is simply no alternative to the Labour Party.

Latter day supporters of new Labour who seem intent on reformulating the party as a much narrower alliance, with all power at the top and a greatly diminished membership, are playing fast and loose with its future for sectarian advantage. They have to be opposed.

See also: ‘Repeat to Fade?: Meeting Labour’s Electoral Challenge’ by Will Brown, and ‘Fade to Mauve: Starmer’s Leadership One Year On’ by David Connolly.