A long forgotten pamphlet by Edward Carpenter extolling the virtues and advantages of co-operatives has been re-published by the Yorkshire Co-operative Resource Centre, Principle 5.

Originally delivered as a lecture at the Sheffield Hall of Science, Co-operative Production was first published in pamphlet form in 1883 but never reprinted and has long since been lost in the fog of history. 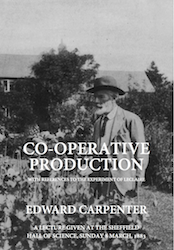 Until, that is, P5’s Chris Olewicz discovered a copy in Shefffield University Library and realised the valuable message it carried for our own troubled times.

In his lecture, Carpenter discussed the ills of industrial capitalism, and proposed co-operation as an alternative system that would promote work to a high standard while improving working conditions and enabling Britain to become more self-sufficient in manufacturing.

As Olewicz writes in his Preface to the new edition, Carpenter had grown “wary about the trend in the socialist movement towards centralisation and bureaucracy”.

“In a 1901 interview for Co-operative News he expressed hope that the ‘present industrial system would soon give place to a freer and more human social arrangement’. In the early years of the movement to reform capitalism, ‘the socialist state, with its dangers of bureaucracy and over-government’ had seemed ‘the only way out of our present evils’.”

Carpenter wrote his lecture at a time of great change in his own life as he was in the process of giving up his career as an adult education lecturer and buying land at Millthorpe, near Chesterfield, to become a market gardener.

“Carpenter despaired at the current state of capitalist production, taking solace in the belief that the co-operative economy … could encourage high quality work,” writes Olewicz.

“Carpenter felt that worker managed co-operatives could build an alternative economic system that would work for all… Co-operative production held within it the potential to transform British society for the better.”

His biting critique of laissez-faire capitalism remains as potent as ever. “Why is it that so much of our natural resource is used to create products of low quality that are rarely, if ever, used?” asks Olewicz. “Why is it that inferior work, with corners cut at every turn, prospers, whilst good work is priced out of the market? Is this the way that things have to be?”