Nelson’s restored Unity Hall finally opened its doors to the public on Saturday 9 October with the official launch of the Selina Cooper Project. JEANNINE SUDWORTH and NEIL RHODES were there to admire the impressive work of the hard-working team who made it happen. 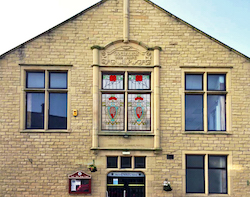 Even from the outside, Nelson Unity Hall is an impressive building, its replica stained glass windows and original 1907 carved headstone prominent reminders of its ILP past and 114-year history.

Inside too, it’s immediately clear the project team of Gary and Kevin Webb, Sue Nike and Sheila Wickes have done a first-class job, with exhibitions in every area of the building … although our first stop was the Revive café for refreshments.

Even there, however, the team haven’t missed a chance to educate their visitors as the back wall is covered with a huge display (pictured below) on the history of the hall from its earliest days as the ILP Socialist Institute, opened by Cooper in 1907. Designed by Camilla Statham, this eye-catching timeline has been produced on specially printed wallpaper.

There are other exhibitions in the café too, focused on the Clarion movement, including the Clarion cycling club and ILP Clarion vans, plus the last remaining Clarion house in the country, found just a few miles from Nelson near Newchurch-in-Pendle. Members of the current Clarion House team were on hand to give more information. 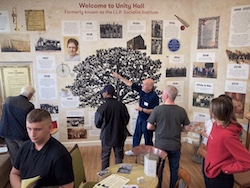 The upper floor of the building houses the Selina Cooper Room with its two large display boards dedicated to Cooper’s life and work, put together by Max Bretherton. This part of the hall also provides wonderful close-up views of the stained glass windows.

Later we were treated to a performance of some of Selina’s speeches, including one made during a visit to Haworth when she was appearing for the North of England Society for Women’s Suffrage. After being pelted with rotten eggs and rotten vegetables, Cooper’s fellow speaker begged Selina not to speak. Undeterred she took on the hostile crowd with a stirring speech.

The Keir Hardie Room on the lower floor is the reading room, complete with the building’s original bookcases retrieved from the cellar and filled with the new library books, although Gary Webb admits the current team “may not be able to match the boast from the pioneers who ran the original library, that they could obtain any requested publication”. 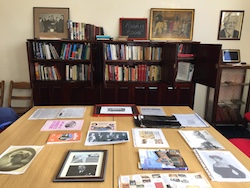 This room (left) also holds a Labour history archive, which Gary is hoping to expand. It  includes a lot of material on the ILP’s distant and not-so-distant past. Indeed, it was surprising to recognise in photos from demonstrations, not only the ILP banners, but ourselves and many friends and comrades among the marchers.

We also attended a talk entitled ‘Conversations about Conscientious Objectors and the Women’s “Peace Crusade”’, by Cyril Pearce and Alison Rowan. The speakers were supported by Jack Burrows, now 94, whose father was one of the many Nelson ILP members who were conscientious objectors during the first World War.

Cyril’s illustrated talk described the areas where there were large numbers of COs at the time, including Huddersfield and Nelson, and showed photos of the men involved, including his own father. There were many others who Jack identified from his childhood, men he described as uncles.

Alison spoke of the impact this had on the women left to endure extreme hardship when their husbands were imprisoned, women who worked together to support each other. 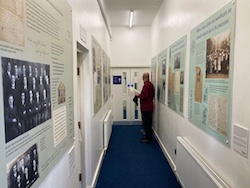 Yet more displays could be found on the lower floor, including one compiled by Rebecca Perry dedicated to the story of conscientious objectors and the women’s Peace Crusade.

All in all it was a highly educational and very enjoyable Saturday outing and we recommend it to all. The project team have done a magnificent job and are keen to show people what has been achieved in recounting the history of the ILP and of the Labour movement in Nelson.

The re-opening of Unity Hall was also covered recently in Big Issue North.

A new booklet, The History of the Unity Hall and the Independent Labour Party in Nelson, Lancashire, was published to coincide with the launch. More details from the Selina Cooper Project: selinacooperunityhall@gmail.com.