Unite Community has been at the heart of campaigns against Tory cuts to Universal Credit. HEATHER BLAKEY and GERRY LAVERY report on the ongoing battle for a new ‘common sense’.

In March 2020, at the start of the Covid-19 pandemic, Universal Credit (UC) was increased from around £75 a week (for a single claimant over 25) to £95 a week. This blanket rise was intended to ‘cushion the sudden impact’ of drastic cuts in income in anticipation of a dramatic rise in claimant numbers – not, as commonly thought, to cover people’s increased costs during to the pandemic. 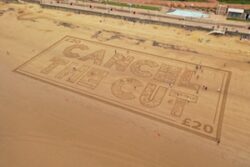 The temporary measure was due to end in April 2021 but Unite Community and many other organisations concerned with justice, equality and poverty fought the cut and campaigned for the increase to be extended to claimants on legacy benefits. Given that UK benefits are among the lowest in Europe, the £20 increase was, in our view, simply a long overdue boost to benefit levels (although still nowhere near the kind of change that’s needed overall).

We won a six-month extension – no small feat given the Tories’ determination to make the cut in April – and won the moral argument for a further extension too, as a majority of voters, including many Tory supporters and MPs, backed our call to halt the cut due for October 2021.

We ultimately lost that battle, although the Tories did soften the blow with an increase in the taper for in-work claimants and a rise in the national minimum wage. While this was a significant win in many ways, those changes actually play into the Tory agenda by widening the divide between the working poor and the ‘unwaged’ poor, such as people looking for work, full-time unpaid carers, and those unable to work as a result of disability.

What is at stake here is an ideological battle between two very different views of benefit claimants. Put simply, the Tories paint unwaged claimants as ‘undeserving’ and pit the ‘deserving’ working poor against them in a deliberate move to divide the working class.

Our attention, however, should be focused on the real causes of poverty: governance of the neoliberal capitalist state for the benefit of the few not the many (to invert a well-known political slogan). Our belief is that every citizen should be allowed to live with dignity.

Seen in this light, the £20 increase in March 2020 was necessary from the Tories’ point of view because an unprecedented number of citizens were about to find out how far from the truth the common stereotype of claimants is, that they ‘scroungers living the life of Riley at the expense of the state’. The Tories needed to act to protect their ideological fiction.

There has, of course, been a long history of negative attitudes towards those in need of public support, reflected in terms such as ‘idle paupers’, ‘scroungers’ or ‘shirkers’ that often emerge alongside consciously punitive state policies. The government’s withdrawal of the £20 uplift is a reflection of that historical trend.

Such negative attitudes can be seen as examples of what Stuart Hall and Alan O’Shea called ‘common sense neoliberalism’, drawing on Antonio Gramsci’s phrase for the simplified, popular but often partial, contradictory and incoherent ideas that shape the way people understand the world.

Such ideas are never fixed, however, and therefore can always be challenged. Common sense contains a healthy nucleus of ‘good sense’, as Gramsci puts it, ideas that can be built on to construct a different perspective. 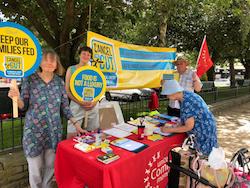 For instance, while claimants may be condemned by some as ’scroungers’, other people hold more sympathetic attitudes. Recent research by the Fabian Society, for example, suggests an increase in public support during the pandemic for improved social security for particular groups (disabled people, carers and young adults), including support for retaining the UC increase.

This reflects our own experience while running campaign stalls. While we did encounter some hostility, there was also significant and heartfelt backing for the £20 increase from many non-claimants, as well as claimants.

Our aim while campaigning was always to challenge stereotypes by promoting positive images of claimants while also highlighting the inadequate levels of benefit. We targeted Tory constituencies in particular, many of them ‘red wall’ or marginal seats, and collected signatures on postcards to send to MPs. We talked to people about the real numbers on benefits in their constituencies.

A few of our members also made media appearances, particularly on local radio, talking about the reality of living on Universal Credit and the difficulties of finding work in their circumstances, shining a light on what the actions of the state actually mean for people.

We took every opportunity to deconstruct stereotypes and push counter-narratives, using data to back up our case. For example, the Department of Work and Pension’s own figures show that people remain unemployed for relatively short periods – 44% for up to three months and 31% for three to 12 months – very different to the popular picture of people claiming benefits as a ‘lifestyle choice’. The truth is, for most, UC is a stepping stone and a safety net between jobs.

We have come to agree with Chris Grover of Lancaster University, who described the Universal Credit cut as state-induced ‘structural violence’. As he points out, if you undermine the conditions in which people live then certain consequences are more likely to follow, such as poorer health, lower life expectancy and even suicide.

Some groups have been hit particularly hard, as Unite’s own survey report on UC states: “UC is entrenching discrimination, affecting women, black and Asian and disabled people more severely as they are disproportionately more likely to be in low paid jobs, casual and zero hours contracts or unemployed.”

What’s more, UC does not help people back into work, as is commonly claimed, but plunges claimants into economic crisis. Their often humiliating and exhausting treatment (including sanctions) can actually hinder their attempts to find a job, further deepening the divide between the working and unwaged poor. And the fear of UC drives people to take precarious work with terrible terms and conditions, hampering the collective fight for decent jobs.

This chasm is intentional, not a side-effect of government policy, something the Labour movement should take greater note of. The ideological narrative about ‘undeserving poor’ is more important to the Tories than the impact of UC or the stated justification for it of getting people back into work. Indeed, Work and Pensions Secretary Therese Coffey, has even refused to release a DWP assessment of the effectiveness of sanctions for getting claimants back to work.

Our aim in fighting the cut is not just to persuade the government to change its ways, but to help us make common cause with other potential forces and campaigners, including backbench Tory MPs. In other words, we are trying to engage in what Gramsci called a ‘war of position’ – not just to tell a different story, but to change consciousness, to increase ‘good sense’ across civil society, and to bring together allies for change.

One of the ways we did this was with an open letter to Chancellor Rishi Sunak demanding the £20 uplift become indefinite and extended to those on legacy benefits. We contacted a wide range of organisations and found that many different groups signed the letter, not just political parties and trade unions, but religious and voluntary organisations, a college, schools, and even a local cricket club.

Regional campaigners gathered outside Sunak’s constituency office in Northallerton to submit the letter shortly before the £20 uplift was due to end (see photo above), an event covered by local TV, radio and newspapers. We also promoted our cause through press releases and on social media, tagging Conservative MPs.

As for Labour, while the Parliamentary Labour Party did argue for the £20 to be retained, we think Labour MPs need to go further and relentlessly highlight, in parliament and the media, the personal impact of the cut and the cost of living crisis on their own constituents.

Clearly, in doing so they should avoid any damaging rhetoric about ‘deserving and undeserving poor’, while trade unions such as Unite should hold them to account.

Ultimately, however, the labour movement as a whole – party and unions – needs to be much bolder, to commit to creating a decent social security system for all, one that we can all be proud of, just as we are of the NHS.

Heather Blakey is the Unite Community regional co-ordinator for the North East, Yorkshire and Humberside.

Gerry Lavery is a member of Unite Community and campaigns co-ordinator for the Leeds & Wakefield Branch.