The Labour leader is right on Ukraine, but wrong in his response to the anti-war left, says WILL BROWN. By threatening the left rather than winning a political argument, Starmer is putting petty vendettas ahead of party unity in the face of this perilous European conflict.

As noted in the ILP’s statement on Ukraine, the Russian invasion deserves nothing but condemnation and all of us on the left must stand in solidarity with the Ukrainian people.

The ILP also believes much of what the Labour leader, Keir Starmer, has said on the crisis deserves our support: opposing Putin’s invasion unequivocally, supporting Ukraine’s resistance, and demanding more far-reaching and effective sanctions against the Russian regime’s supporters in the UK. 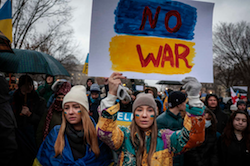 However, Starmer’s statement to the Parliamentary Labour Party on Monday 28 February that “there will be no place in this party for false equivalence between the actions of Russia and the actions of NATO” extends his increasingly authoritarian approach to party discipline and will do nothing to help the party unite in the face of this new European conflict. Seemingly unaware of the irony, he cited Labour’s commitment to democracy as a reason for this move and his insistence the previous week that MPs withdraw their support for a Stop the War (StW) coalition statement on Ukraine.

As Diane Abbott noted, even under Tony Blair’s leadership, as war on Iraq loomed, Labour MPs were allowed to make criticisms of the policy and to support campaigns against the war, including those led by StW. Critics of Blair’s policy included, we should note, one Keir Starmer.

Indeed, far from expelling MPs opposed to his policy, Blair engaged in an exhaustive round of debate within the party, with his MPs, in parliament and in with the public. Whether Starmer is simply insecure, or whether this is just a trumped up means of removing yet more left-leaning MPs and members, it bodes ill for the ability of the party to discuss and debate vital areas of policy.

The move is wrong on two crucial counts. First, we do need to be able to debate the Ukraine crisis and the UK and wider international response to it – this isn’t a simple problem with a simple solution. Second, the StW and hard left response to Putin’s invasion is so flawed and out of touch with public opinion, that it doesn’t warrant this kind of draconian edict from the leadership.

Starmer’s presentation of Labour’s relationship to NATO is, of course, very one-sided. True, it was a Labour government that helped to establish NATO as the Cold War took hold in the late 1940s following the West Berlin crisis and the emerging US policy of containment. It was designed, in the words of NATO secretary general Lord Ismay, “to keep the Russians out, the Americans in, and the Germans down”. 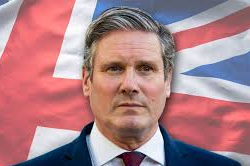 It is also true that it has never been Labour policy to leave NATO, even in the early 1980s under Michael Foot’s leadership. While committing Labour to nuclear disarmament, the 1983 election manifesto reaffirmed Labour’s support for collective security and for NATO as an instrument of deterrence. And Labour figures have played important roles in NATO (for example, George Robertson served as NATO secretary general from 1999-2004).

And it is right that the party should have this diversity of views, not least because there is a variety of opinions in the wider political and academic arenas about NATO’s purpose, strategy and actions.

As Starmer ought to know (or his advisers ought to have told him), there is voluminous literature in the fields of international relations and security studies debating NATO’s 1990s enlargement strategy, its engagement in ‘out of area’ operations beyond Europe’s borders, and its evolving ‘strategic concepts’ that guide its focus and capabilities. These debates are of critical importance now as the international community tries to find an effective response to the invasion of Ukraine.

As we’ve noted, Starmer is largely on the right side of the argument on key points of the Ukraine crisis: there is no equivalence between the actions of Russia and the actions of NATO, and he is absolutely right to push this incompetent Tory party – up to its neck in Russian money – to go much further in targeting the oligarchs who back Putin. 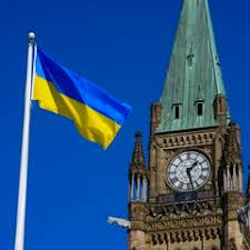 But he is wrong to think that disciplinary action is necessary to deal with the StW left and wrong to engage in ad hominem attacks on them. The threat of expulsion treats a political difference as if it were, like antisemitism, a code of conduct issue. The two are very different. Using it looks weak and, given the left’s limited influence, is entirely unnecessary.

What’s more, although the StW left has at times made valid points in relation to debates around NATO, its approach to the Ukraine crisis is seriously flawed.

The StW statement of 24 February at the centre of this row largely reflects what has been the hard left’s approach to international affairs for many years, one which lies at the heart of Jeremy Corbyn’s view of foreign policy. While condemning Russia’s actions and calling for an immediate withdrawal of Russian troops, the rest of the statement is almost entirely directed to criticisms of NATO (for eastward expansion), the US and UK (for their wars of aggression in the past), and the British government (for its ‘provocative role’ in the current crisis).

Although it doesn’t use the same language (StW use the term ‘great power conflict’ rather than ‘imperialism’, presumably so as not to scare the horses), the statement essentially reflects the position of the Socialist Workers’ Party (SWP) and the wider Leninist ‘International Socialist Tendency’.

Lenin interpreted the First World War as a clash between rival imperial powers and argued that revolutionaries should direct their opposition to war at their own ruling class. Statements on Ukraine from the SWP, some Labour left groups, Democratic Socialists of America, and others, all slavishly follow this logic, repeating the mantra (originally coined by German revolutionary Karl Liebknecht), “the main enemy is at home”. The StW statement enacts the same strategy, if not naming it as such.

Thus, while Starmer perhaps went too far in claiming that StW “actively give succour to an authoritarian regime” he wasn’t too far off the point. In response, the likes of Corbyn and Lindsey German (convenor of StW) can loudly protest their advocacy for human rights and their more dubious claims that they were ‘right’ about previous NATO actions.

Nevertheless, by directing all their political energies at criticising NATO and western governments, the StW left are massively out of step with much of the Labour membership and the wider public over Ukraine. Even if the Leninist logic made sense in 1914 – and that is pretty debatable – it really doesn’t have much relevance as a guide to action now. 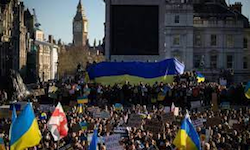 For socialists and progressives, international politics are in a period of peril unlike any we’ve faced since the height of the cold war. The ascendency of liberal democracy that many proclaimed after the end of the Cold War is under increasing pressure both at home and abroad.

Whatever criticisms we might make of that period of liberal hubris in the 1990s, and the US hegemony that lay behind it, we should be in no doubt that the resurgent authoritarian power of Russia and China are nothing but negative. Rights enjoyed under liberal democratic regimes were hard won, often by the struggles of working-class organisations and social movements. To dismiss western liberal democratic societies as simply ‘imperialist’, and to make no distinction at all between the actions of democratic states and those ruled by repressive authoritarian leaders, is perverse.

When a ruler like Putin is subjecting a sovereign state to the most brutal assault, killing civilians and flagrantly breaking international law, to imply that ‘the main enemy is at home’ is to engage in a wilful refusal “to determine who the main actors driving the war actually are”, as one Syrian activist put it.

Taras Bilous of Sotsialnyi Rukh summed up a Ukrainian activist’s view of the ‘anti-war’ western left: “Time and again, the western left responded to the critique of Russia by mentioning US aggression against Afghanistan, Iraq and other states… A large part of the western left should honestly admit that it completely f***** up in formulating its response to the ‘Ukrainian crisis’.”

In this context, Starmer’s resort to threats of disciplinary sanctions within the Labour Party is to opt for dragooning MPs and members to back him rather than seizing the opportunity to win the argument and build genuine suppoprt across the party.

Unfortunately, gleeful cheers from the Labour right wing for Starmer’s move suggests that building necessary unity and solidarity with Ukraine is playing second fiddle to an ongoing vendetta against the Labour left.

See also: ‘Solidarity with the People of Ukraine’, the ILP’s statement on the crisis.