Keir Starmer has committed to promoting pluralism within the Labour Party. DAVID CONNOLLY argues that the left should give Labour’s new leader a fair chance to prove himself.

The coronavirus crisis dominates all our lives and will do so for a long time to come, whether you are a courageous frontline worker or in self-isolation, directly affected by its dire economic impact or attempting to go about your ‘normal business’. 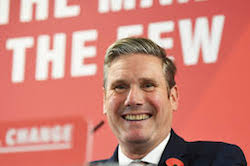 From the onset of the pandemic in the UK, and even before that, the situation has required clear-sighted political leadership and a willingness to tell some hard truths. Instead, from mid-February to mid-March, there was a level of government complacency that seemed to be based on hoping for the best without preparing effectively for the worst.

True, any government would have struggled to cope with the biggest pandemic since the Spanish flu a century ago, but we are now playing catch-up with very mixed results.

In the middle of this, we’ve had a Labour leadership election, which concluded with a decisive victory for Keir Starmer with 56.2 per cent of the vote in the first round. Angela Rayner was elected deputy leader with 52.6 per cent in the third round.

In my view, Starmer is a Labour centrist who will seek to work within the Labour tradition. He is not the new version of Tony Blair, whose ambition, recently re-stated, was to recreate the Lib-Lab alliance of the late 19th century, a peculiar project for someone otherwise obsessed with the ‘new’ in politics.

It is worth reading Starmer’s manifesto with its 10 commitments, which would have been regarded as a left-wing document at any time between 1997 and 2015. It is argued by some that his stance is temporary and pragmatic, one employed for short-term gain to be ditched as and when necessary. But this underestimates the policy impact of the Corbyn surge, which has been radical and profound, and effectively dragged Labour back into the social democratic mainstream.

Interestingly, and scarcely registered by anybody to date, point 10 of Starmer’s manifesto states his support for improving the internal culture of the Party by ‘promoting pluralism’.

My dictionary defines pluralism as “a state of society in which members of diverse groups develop their traditional cultures or special interests within a common civilisation”. In a party context I take this to mean the free exchange of ideas and policy proposals from all shades of internal opinion. If this is correct it has significant overlap with the ILP’s concept of ‘co-existence’ (see ‘Our Politics’).

But there is a very important debate to be had about where constructive pluralism ends and destructive factionalism begins. Starmer has made repeated calls since his election to ‘end factionalism’, but ideas and policies are usually promoted by organisations and pressure groups, and there must be space within the Party for that to continue.

Against this background, the leaked anti-Semitism report, revealing a twisted and corrupted mentality among some senior party officials, is indeed an opportunity for the new leader to address the Party’s culture from the top down, including the often-strained relationship between Party managers and its members.

This kind of tension between elected leaders and unelected officials is hardly new, it happens in all kinds of organisations, but the wholly disrespectful attitudes and dreadful language revealed by the report has surely brought us to an all-time low. The dismay felt by some officials at Labour’s better than expected performance in 2017 is profoundly shocking and the independent inquiry ordered by Starmer must be comprehensive and wide ranging if a basic level of confidence in the Party’s administrative structure is to be restored.

For some on the left, it seems, the disappointment of December’s election defeat, the setback (as they see it) of Rebecca Long Bailey and Richard Burgon failed leadership and deputy bids, and now the leaked report, justifies leaving the Party altogether. 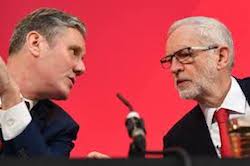 There may not be a large number of people who come to this conclusion, but those who do underestimate both the deeply rooted conservatism of some sections of the population, which Boris Johnson exploited ruthlessly, and the long-term nature of the ideological struggle necessary within the broad church of Labour. Of course, none of that applies if you think there is a silent majority for socialism already in existence in wider society.

As Red Labour’s Ben Sellers pointed out some time ago, events in 2015 happened ‘back to front’. The introduction of a reduced fee for registered members, and the abolition of the electoral college – both at the behest of the Blairites – allowed the leadership to be accidentally and unexpectedly captured by the left before the groundwork had been done at constituency and official level to embed a new and different approach to politics.

Energies that might have been used to take a radical message to the community were then inevitably diverted into countering the intensive guerrilla warfare waged on many fronts by the Labour right and their allies whose combined sense of loss and entitlement allowed them to push the Party to the very brink.

However, for members on the left to leave the Party now would be to consciously forego the hard-won social democratic policy gains that have been made. Members should stay and argue their case, not least because political progress rarely goes in a straight line.

Others on the left, such as Momentum, argue that now is the time to hold the new leader’s “feet to the fire”, a somewhat uncomfortable phrase that always sounds as if it has a touch of sadism about it. For them, it seems, the forthcoming period is an opportunity to exact an element of revenge, for the left to do to Starmer (elected by the members in a democratic process) what was done by the right to Corbyn (also elected by the members in a democratic process). They seem keen to find fault from the outset, but taken to extremes this approach would lead us back into a sterile civil war.

The new leader, indeed any new leader elected by the membership, deserves a fair chance to prove themselves. If they fall short we should not hesitate to say so, but we do it as ‘critical friends’ not as sworn enemies, unless and until constructive dialogue becomes impossible or counter productive. Members have a right to make their criticisms and pursue their ‘special interests’ but we all also have a responsibility to engage constructively ‘within a common civilisation’.

It’s what ‘pluralism’ should be about and, whether you are a leader or a member, it works both ways.

The above article was altered slightly from the original on 11 May 2020. An addition was made to the second sentence in the penultimate paragraph.