WILL BROWN assesses the mixed bag of high-handed and factionally-driven party rule changes pushed through Labour conference in the wake of Keir Starmer’s last minute proposals.

Combining control freakery with incompetence is never a great look for any leadership team, but by raising far-reaching rules changes on the eve of conference made for a particularly bad start to this year’s get together. 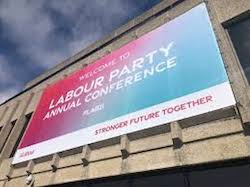 Keir Starmer’s undemocratic proposal to return Labour leadership elections to an electoral college system met with fierce resistance from constituency parties and unions. Reports that even right-leaning CLPs came out strongly against the proposal were amplified by increasing expressions of doubt from shadow cabinet members.

Sadly, that didn’t include Ed Miliband, the architect of Labour’s one member one vote (OMOV) system in 2014. However, it was the absence of union support that finally seemed to push the leadership to drop the proposal at Saturday’s NEC meeting.

Of course, it is possible that the electoral college proposal was a feint, designed to draw opposition and thus allow a raft of lesser changes to pass. Either way, the constitutional changes agreed by conference on Sunday are significant, and a very mixed bag.

The agreement of a long overdue independent complaints and disciplinary process is welcome, even if there are valid doubts about the continued influence of party general secretary David Evans, whose actions over recent months give grave cause for concern.

Welcome too, is the removal of the right of registered supporters to have a vote in leadership elections. This was part of Miliband’s system that the ILP always had misgivings about. It was unfair to fee-paying members and led to no end of wrangles in the 2015 and 2016 leadership elections.

Similarly, the creation of a freeze date for eligibility to vote is sensible and in line with other areas of the Labour rule book, although requiring members to have six months membership before a leadership contest is excessive. Like many other constitutional changes, this factionally-driven move – seeking to prevent the kind of membership surge that helped Corbyn to victory – may turn out to be one that’s fighting yesterday’s war. If left-leaning members stick around and don’t leave the party, it will cement their remaining influence.

Far worse were the changes agreed for the nomination process for future leadership candidates. These raised the nomination threshold from 10 per cent to 20 per cent of MPs in the Parliamentary Labour Party. As many pointed out, in 2020 this would have only left Starmer on the ballot paper.

This is more than a reversal of Corbyn-era reforms. The Miliband-era threshold was 15%, Corbyn’s team sought to reduce that to 5% and eventually agreed on 10%. It will do nothing to promote political pluralism and has been introduced without any consideration for its impact on equality and diversity in leadership contests.

Moreover, these rule changes leave in place the role of unions and CLPs in finalising the nomination process (a role created by Corbyn’s reforms). Under the new rules, not only do candidates need to be backed by 20% of MPs, they also need support from three affiliated organisations (two of which must to be trade unions) or 5% of CLPs.

Taken together, this will undoubtedly make any future leadership contest a narrow affair. Reassurances from Labour’s front bench that the PLP would never allow a lack of diversity sits ill in a party that has only ever elected white male leaders, and mainly right-leaning ones at that.

The process for reselecting or deselecting sitting MPs have also been returned to pre-Corbyn days, while there are two other features of these ham-fisted reforms that need to be noted.

First, springing the changes on the party at the last minute in an attempt to wrong-foot opposition merely increased anger among members. Such high-handedness, reminiscent of new Labour, is becoming all too frequent under Starmer’s leadership. It makes for a poor comparison with the process preceding Miliband’s reforms, which were presaged by a lengthy consultation and nine months of CLP debate before being agreed at a special conference in 2014.

Secondly, the dominant role of the unions again seems to have escaped serious scrutiny. Whatever anger was expressed at constituency level, it was lack of support from three trade unions that eventually forced Starmer to pull back from the electoral college. The reform package as a whole passed with the backing of union leaders (CLP delegates were 52-47% against).

Further votes at conference have reinforced the fact that three big union executives continue to wield almost veto-power over the party rules and policy making. This was most egregious in the vote on a motion supporting proportional representation in which CLP delegates voted 80-20% in favour while unions were 95-5% against.

Neither Labour’s left nor right ever seem willing to address this blatantly undemocratic practice, nor demand serious scrutiny of the opaque processes by which union leaders decide how to cast their ‘1.2million’ votes.

See also: ‘Starmer’s Attack on Party Democracy’ by Will Brown, and ‘The Battle for Labour’s Soul’ by David Connolly.