When Tony Blair’s New Labour government was elected on 1 May 1997, exactly 25 years ago last Sunday, it brought to an end 18 years of Conservative rule.

For many associated with the party, and many more who weren’t, Labour’s landslide victory marked a moment of hope and optimism after nearly two decades of Thatcherism and so many years of ideological and electoral defeat. 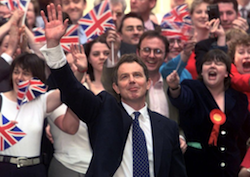 For many on the left, however, there was also anxiety. Blair and those around him in the leadership team had made no secret of their desire to jettison some, if not most, of Labour’s cherished traditions and causes, to dissociate it from the red-flag waving days of the past.

Indeed, the very name ‘New’ Labour was an attempt to re-brand the party, while Blair had already persuaded members and affiliates to agree a radically re-written version of clause 4 of the party’s constitution, the often-cited and, for some, almost sacrosanct statement of its essential aims and purpose.

By May 1997 some on the left had already taken a purely oppositional stance to Blair, seeing New Labour simply as a dangerously right-wing take-over, one that would wrest the party away from its historic socialist mission.

Others, including the ILP, adopted a more open and questioning attitude, seeing scope in some of what the new leadership was saying for dialogue and discussion, perhaps even space to push for more radical interpretations of some of its stated values and core principles.

For the ILP, this attempt to relate to the party’s new direction as ‘critical friends’ from the left was most clearly and comprehensively expressed by the late Eric Preston, for many years the organisation’s leading writer and intellectual figure.

To mark New Labour’s 25th anniversary we are publishing – in downloadable PDF form – the full text of a talk Eric presented to the ILP’s AGM in 1995, a full two years before Blair’s election victory. It’s a long article that was later distributed internally via the ILP’s News and Views paper but never before made available to a wider readership.

It was one of Eric’s major works from one of Labour’s most turbulent and radical eras, and perhaps the key text among a number he produced in the 1990s as we, like much of the left, struggled to understand a world being re-shaped rapidly by the collapse of Communism in eastern Europe, the fragmentation of class structures and identities, and the popularity of neo-liberal governments at home and abroad.

Eric’s aim, as he writes in his typically hesitant introduction, “was to start to suggest how we might begin to become more politically connected and relevant in the present unpromising climate, and to indicate how we might start to relate to New Labour and its leadership”.

With the world again in turmoil, and the left again in retreat, that’s a task that seems no less relevant today.

As ever with Eric, addressing the immediate concerns of the day also meant re-examining the theoretical and historical underpinnings, not only of the ILP, but of the broader democratic left, including in his remit a re-assessment of class politics, a consideration of the place of markets in a socialist society, and an assertion of the essential importance of democracy to any version of socialism worth its name, or any worthwhile movement for radical social change. 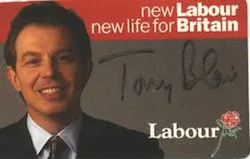 Indeed, this notion of ‘radical democracy’ was at the core of his argument about how to advance the socialist cause, and formed the heart of his bridge-building approach to New Labour.

“As far as I am concerned,” he writes, “economic control by a minority is incompatible with democracy, and only by developing and extending democracy can we involve and empower people and encourage the blossoming of society that is the socialist promise.

“That places the extension of democracy and the pursuit of the democratic society at the heart of our socialist politics.”

This “democratic bridge”, as he calls it, not only spans the gap between revolutionary politics and reform, but is “central to both”, cutting across economic and social boundaries, and undermining capitalist notions of ownership and control.

What’s more, it was echoed in the very words and concepts of the New Labour leadership, people such as then shadow chancellor Gordon Brown who said “democracy lies at the dynamic centre of socialist belief”, and the National Executive Committee which stated in its paper on the new clause 4 that Labour’s aim “is not just to use and defend democracy, but to extend it throughout society”.

Back then, as now, many on the left chose to believe there could never be any radical intention or potential in an insufficiently socialist Labour leadership. For many it was “bourgeois reactionary claptrap”. And of course, they had good reason for their suspicion and opposition.

For Eric, though, wholesale rejection was “a grave mistake”. “It places you in a position where you cannot, thereafter, claim any of the statement for socialism,” he writes. “You have voluntarily given ground. You can’t fight for a socialist interpretation… And you can’t criticise or indict the leadership for failing to live up to any socialist or worthwhile promise because you’ve already said there’s none there.”

The ILP is re-publishing Eric’s Agenda more than 25 years after it was written, not only to mark an important moment for the Labour Party, but also because the principles it sets out remain central to the ILP’s perspective, our understanding of socialism and social change, and, crucially, our attitude to the Labour Party, whichever wing or faction happens to be leading it at the time.

As Eric writes, it’s “much better, when we are confronted with proscriptions, be they from left, right or centre, that we look for agreement, for advantageous interpretation, for a foothold, for leverage… And only when that fails do we become oppositional.”

These are words that resonate today, a time when the Labour left again feels beleaguered and sidelined, even hounded, by a ‘right-wing’ leadership.

Inevitably, some of Eric’s talk sounds dated, and perhaps over-optimistic about the left’s potential influence, but we think there is much of value in his exhortation to “deal in the common currency of our movement and our society”, to continue to build a “democratic bridge”.

If nothing else, we hope you find it an interesting and thought-provoking read.

You can also read ‘As he Saw It’, another unpublished piece from 2012.
We hope to publish more of Eric’s writing in various formats over the coming months.

You can read David Connolly’s tribute to Eric Preston here.